Patricia Clarkson: ‘I wanted to be one of the great theatrical thespians’ 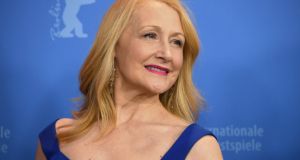 Patricia Clarkson is accustomed to fans approaching her in the street. “Sometimes it’s for House of Cards, or Pieces of April, or The Station Agent, or this little movie I did called Learning to Drive, or it can be High Art, or this drunk cameo I had on Broad City,” says the versatile actor.

Nothing, she says, could have prepared her for the HBO effect. Since playing the ghastly matriarch at the centre of the miniseries Sharp Objects – for which she won a Golden Globe earlier this year – she is turning more heads than ever at the supermarket.

She gestures out the window of the central London hotel where we are sitting. “Even here, people keep coming up and whispering: My God, you’re that terrible lady.”

Patricia is the daughter of Jackie Clarkson, a New Orleans politician and councilwoman, and Buzz Clarkson, a retired university administrator. She is one of five sisters and every inch a southern belle.

“All of my sisters have beautiful lives and families,” she says. “My older sister is like me. She’s not married and doesn’t have children but she has a big career. They’re all formidable women. My mother is a remarkable speech maker. She has been elected many times. She has served the city well. She never left during Katrina. I’ve got a lot of oestrogen around me. I grew up with hair curlers and skirts. So I’m drawn to powerful female energy. I love being around powerful women.”

She has, accordingly, worked early and often with female directors, including Lone Scherfig (One Day) and Rose Troche (The Safety of Objects).

“I’ve worked with two amazing British directors – not quite back to back – but within 18 months of each other: Sally Potter and Carol Morley. I’ve worked with Lisa Cholodenko twice; I’ve worked with Isabel Coixet three times. I’ve been directed by Robin Wright on House of Cards. We’re working in an industry that has failed to recognise women too often. We need to do better. There are not enough films directed by women. And there’s not a big enough pool to choose from. Let’s increase that pool. Let’s have more women directing. That’s the biggest hurdle: putting more women behind the camera. From there we’ll get more female led and female-driven stories.”

Carol Morley’s Out of Blue is very much a change of pace for Clarkson, whose deep, soft voice, elegant dress, and perfect lean-in posture couldn’t be more lady-like.

The twisty, multilayered mystery – an adaptation of Martin Amis’s novel Night Train – from the writer-director of The Falling and Dreams of a Life, sees Clarkson play Detective Mike Hoolihan, a lone wolf and rather androgynous cop investigating the death of a physicist (played by Mamie Gummer). The scientist had specialised in black holes, a detail that becomes increasingly important in an uncertain narrative. Various suspects emerge, including a shifty observatory manager (Toby Jones) and a powerful good ol’ boy (James Caan) but temporal shifts suggest there’s something more to this case than meets the eye.

“I had to read it three times before I called Carol,” says Clarkson of the script. “Finally I call her. We’re supposed to have a 30-minute meeting. Three hours later I was doing the part and we’re still talking. It’s a dense script. It required a lot of homework. I’m meeting detectives and I do some gun training. But that’s the easy part. I had to think a lot about loneliness and sorrow. Because we were shooting in New Orleans, I was seeing my parents and my mother noticed how sullen and insular I was.”

Clarkson believes she inherited her interest in acting from her Irish-German grandfather, John Patrick Brechtel, a football coach and keen amateur performer.

“He was a brilliant, remarkable man,” says the 59-year-old. “He was the first coach in New Orleans to let blacks and whites play on the same field. I have his Shakespeare book that he made notes on, and so help me, if there’s a fire in my house, it’ll be the first thing I go for.”

Clarkson, a theatre rather than movie buff, performed in Eugène Ionesco’s Rhinocéros while she was still in high school. (“Who in hell knew what that was?” she laughs; “My drama teacher and me, apparently.”) She graduated with the highest distinction from Fordham University’s acting programme and completed her master of fine arts at Yale School of Drama in 1985. She made her Broadway debut within a year.

I am a shape-shifter. I honestly don’t see a difference between character actor and leading lady

“I came to Tennessee Williams and Neil Simon later on,” she says. “But at school I was really drawn to European writers like Ibsen and Chekhov. I struggled with O’Neill. But I loved the theatre of the absurd. I didn’t want to be a movie star. I wanted to be Bernhardt. I wanted to be one of the great theatrical thespians.”

The movie world had other ideas. She made her feature film debut in Brian De Palma’s G-Man revival, The Untouchables (1987), followed by a role in Clint Eastwood’s The Dead Pool (1988). Her 1998 portrayal of a drug-addicted lesbian in High Art changed everything. That was the role, she says, that has allowed her to criss-cross between blockbusters (The Maze Runner), auteurs (Woody Allen, Martin Scorsese, Lars von Trier), and the occasional comedy cameo (American Dad, Parks and Recreation).

“I am a shape-shifter,” she says. “I think people suddenly realised that after High Art. I honestly don’t see a difference between character actor and leading lady. They’re all characters. It’s just that some are more glamorous than others.”

Out of Blue is released March 29th