Blinky Bill the Movie review: you had us at eucalyptus

The iconic Australian koala goes in search of his long-lost explorer dad in this animated film that will please the kids, if not their parents 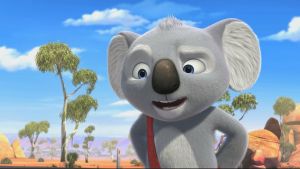 Ruder than Pooh, sweeter than Dennis the Menace: Blinky BIll

Blinky Bill is a smart-mouthed koala created in the early 1930s by the Australian children’s author and illustrator Dorothy Wall.

The naughty marsupial has already enjoyed almost a century of celebrity: he joined the Australian army as a mascot in a 1940 adventure, he brought out a family cookbook in 1977, graced a postage stamp in 1985, and was adopted as a talisman by the Australian Republican Movement in 1993. (Paradoxically, a 1937 comic strip featuring the marsupial saw Blinky leave his native Oz to attend the coronation of King George VI and Queen Elizabeth.)

This new CG-animated feature, following on from 1992’s Blinky Bill: The Mischievous Koala, marks Blinky’s second crack at the movieverse and sees the little chap venture off in search of his long-lost explorer dad.

Along the way he befriends Nutsy, a koala who was raised in captivity, two eccentric emus (both voiced by Toni Collette), a wise-cracking lizard and one weird wombat (Barry Humphries).

Inevitably, our high-spirited hero makes some enemies, too, notably a power-mad goanna and – watch out, Blinky; he’s a pomme ie a Britisher – Sir Claude, a wild (and somehow knighted) cat played by Rufus Sewell.

Ruder than Pooh Bear but sweeter than Dennis the Menace, Blinky loves his mum and his various chums. He may prove rather too quaint for older children, but younger ones will likely enjoy the high jinks and DayGlo colouring.

Accompanying adults may notice that the plotting could be tighter and the animation could be more sophisticated, but at 87 minutes, Blinky at least knows when to say “Hooroo”.

The Movie Quiz: Who stirred the late Olivia de Havilland to consult her lawyers?
8