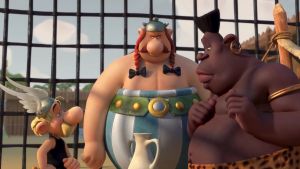 Plus c’est la même chose: Asterix, Obelix and a non-national in Asterix & Obelix: The Mansion of the Gods

Film Title: Asterix And Obelix - Mansion Of The Gods

Roman hegemony continues unabated. Or it would do if it weren’t for that one pesky Gaul village with the magic potion and the rowdy inhabitants.

If only there was some way to assimilate these long-time hold-outs into the greater empire? Maybe architecture is the answer? Surely a few Corinithian columns will razzle-dazzle the unruly proto-Bretons into submission?

Understandably, Asterix and Obelix are determined to halt Julius Caesar’s new real-estate plan. Resident druid Getafix’s magic potion is utilised to plant quick-maturing trees and is passed along to the slaves working under the highly strung architect, Squaronthehypotenus.

Asterix imagines their new powers will allow them to rebel and escape; instead, they form a trade union and allow the new Roman settlers to arrive in no time.

It’s time for plan b. And then possibly c.

The CG might be a little algorithmic but this new animated feature based on the much-loved Asterix adventure Mansion of the Gods is a marked improvement on the same franchise’s live actioners starring Gérard Depardieu. It helps that Mansion of the Gods is one of the most eventful Asterix adventures and that the English-language voice cast – Whitehall, Frost, Tate, et al – have plenty of comic nous.

Co-directors Astier and Clichy mostly stick carefully to shenanigans of the 17th volume of the Asterix comic book series, by René Goscinny and Albert Uderzo, with its sideswipes at colonisation and capitalism. But they do - happily - clean up the rather dated racial profiling found in the 1971 original.

Purists may miss the zany wordplay and argue with a denouement that is rather less tart than the one found in the source material. But they’re unlikely to find these alterations too Gauling.