Waiting for Grace’s Day to dawn

William Wall: ‘It took me eight years to write the book – every sentence took shape slowly’ 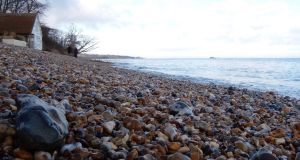 The Isle of Wight

Grace’s Day began for me (appropriately at dawn) as a single sentence: “There were three islands and they were youth, childhood and age, and I searched for my father in every one.”

I don’t know where it came from: it was there in my head when I woke on a July morning 10 years ago, insistently demanding to be noticed, like a bird tapping at the window. I wrote it down and as I wrote I became convinced that the voice was a woman’s. I don’t know why. Objectively, there is nothing in the words that determines a gender. It was just a hunch, an instinct. Maybe whatever brought the sentence to my head during the hours of sleep was part of a bigger dream. It’s often like that for me, and that initial gift of a phrase gives me a voice in which to tell the story – a magical, and rare, moment in my working day.

But the sentence also presented me with a question: which islands? Almost immediately I knew the answer. The story would unfold, for the most part, in three places – in Ireland, England and Italy, in particular places that I know and love.

It opens on Castle Island, off the coast of west Cork, a beautiful empty rock facing the majesty of the Atlantic (though I imagine it further offshore than it actually is). The house where Grace and Jeannie and their family live is, in reality, a ruin on the eastern shore. It looks onto a little pebble beach and the sound that separates it from Horse Island.

It was populated until some time after the Great Famine but all that remain now are the shells of the dwellings, the dry-stone walls, a ruined castle on the cliff above the pier – a place that plays a fatal role in the novel – and sheep. This is Grace’s habitat.

The second island is The Isle Of Wight where an aunt, who was like a second mother to me, lived and where I spent many holidays as a teenager. I grew to love the chalky coast that fell into the sea after every storm, revealing fossils for the picking. I still have a fossilised sea-urchin that I found at my feet after a swim. Jeannie, the teenager who will grow up to be a geologist, is happiest here, collecting dinosaur bones and stones.

The third and final island is Procida in the Bay of Naples, the most densely populated rural area in Europe. It’s the setting for the beautiful Massimo Troisi/Michael Bradford film Il Postino (The Postman). I fell in love with the place many years ago and have struggled to write about it ever since. It is the setting for the denouement of the novel, the polar opposite of the first island surrounded by our cold North Atlantic. The conflict of the ending is, I hope, counterpointed by the luxurious and communal life of the Mediterranean.

Grace and Jeannie and their father are islands too – the word “isolation” has its roots in the Italian word for island (isola) – and in many ways their mother is their mainland and the mainstay of their lives until tragedy overwhelms her. The book works through themes of islands and oceans, the sea eroding the land, the solid melting, everything shifting shape, lives complicated by a single mistake.

Triads and triangles, both verbal and human, are very important to the structure of the book. The triad form has a long history in Ireland going back at least to late mediaeval manuscripts. But the immediate source in my own imagination, and probably for the forgotten dream that gave me the sentence, must be WB Yeats’ The Wanderings of Oisin, but also The Circus Animals’ Desertion, with its meditation on youth and old age, Oisín led “through three enchanted islands’ and the ‘themes of the embittered heart”.

In a way (at least in the revisions), I thought of the book as a poem about landscape and the people that move through it. I wanted it to feel luxurious, full of sounds and sights and tastes and smells. I wanted my readers to taste the salt sea and the local Italian wine, to feel the cold wind of the Irish coast and the scorching heat of Naples.

It’s possible that my music listening habits influenced the decision about the gender of the narrator. Two Irish songs obsessed me at the time – An Mhaighdean Mhara (The Mermaid) and Dónal Óg (Young Donal). I collected versions of them and made full or partial translations several times. Both of them are at least partly a woman’s narrative, Dónal Óg in particular expressing a woman’s desolation and loss. I sense that guiding voice behind much of the book, though I don’t think I could identify a particular sentence or scene directly influenced by either of the songs.

Grace, though, is a child of the ocean, and like the mermaid of the song she is only at home on or in water and the land is a foreign country to her. She swims a lot, and each time she swims it shifts the perspective of the book a little. She is swimming away from home, from people, swimming out beyond safety, out on the deep ocean, and from that place of profundity and danger she sees things differently, or thinks she does. By contrast, her sister Jeannie is a geologist (“Jeannie loves rocks”) and the land is her natural environment. This elemental difference determines their relationship for much of their lives.

It took me eight years to write the book – every sentence took shape slowly and was cut and re-edited until it was as intense and as shapely as I could make it – but perhaps the first problem I faced was that the story would be narrated by the two sisters, Jeannie and Grace. I experimented with multiple points of view and played various games with chronology and structure, but in the end I opted for a plain pattern of alternating chapters, each one narrated by one of the sisters. To distinguish them I resorted to simple techniques: for example, the first paragraph of each chapter mentions the other sister, so by default we can conclude who is speaking; or, for another example, Grace’s narrative is in the past tense, Jeannie’s is in the present. I hope it worked. I’ll find out from my readers to whom the book will soon belong.

But I’m certain of one thing – after long years of work and waiting, it’s time for Grace’s Day to dawn. Good luck to her.

Grace’s Day was published by Apollo on August 9th

William Wall is the author of four previous novels, three volumes of short stories and four collections of poetry. His work has won many awards, including the Virginia Faulkner Award and the 2017 Drue Heinz Literature Prize. His 2005 novel, ‘This is the Country’, was longlisted for the Man Booker Prize.