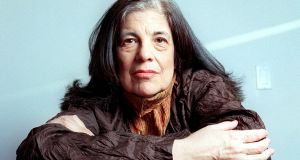 Yes, Susan Sontag was one of the greatest thinkers of the 20th century. And yes, she was one of those who formed society as we now know it. Sontag was a new, shiny and exciting kind of celebrity, both devastatingly cerebral and devastatingly sexy. And no, it’s not sexist of me to say so – there aren’t many of the eminent intellectuals of our times whose faces, from the very first edition, appeared on the front covers of their books.

She was of the Warhol school – she was her own brand. Not just Susan Sontag, but Susan Sontag, LTD. Everyone who knows of her knows those dark eyes. This is part of her fascination. She knew it, and worked it. She analysed and revealed both new societies and new ways of seeing, much like Joan Didion, like Simone de Beauvoir. Heck, these women created new ways of seeing.

She was often combative when displaying her fierce, her sometimes cutting intelligence. There is, on YouTube, one painful video of herself and John Berger publicly debating, in which at every turn she so effortlessly, so witheringly, disproves his arguments that it feels as though you can see his crossed legs protectively pressing tighter together as the talk progresses. (He though, as ever, is a total gent about it.)

Yet Sontag, like most of us, was also a sensitive and anxious person. She had trouble accepting her own lesbianism, and often felt worthless. She berated herself constantly, never feeling good enough. She was highly ambitious, had mommy issues, and was deeply private, alongside being such a public figure.

This side of Sontag comes to the fore in her early diaries, which is why, when taken alongside her non-fiction, they prove such exhilerating reading. Ah, the relief in knowing our literary gods aren’t gods but women and men, who smoke and obsess and make endless lists and say silly things sometimes!

Susan Sontag’s diaries give us the flesh-and-blood woman who possessed the genius. Turns out she was a bundle of contradictions – but then, who isn’t?