But, two decades after Every Dead Thing, A Book of Bones is not the end of story 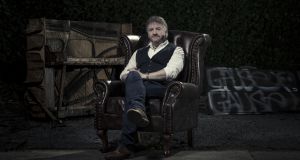 ‘In other genres, fantasy or science fiction, or historical fiction, we’re quite ready to countenance the idea that readers might be prepared to have a memory.’ Photograph: Nathan Duff

I first met John Connolly 20 years ago in a bar on Lower Abbey Street in Dublin, where I interviewed him for an RTÉ books programme whose name I can’t recall. (Ian Rankin was also a guest on the show, just before he broke big – that’s how long ago it was.) Connolly was already the talk of the town because his first novel, Every Dead Thing, had sold in the UK and the US for sums that would seem fantastical even now. We bonded over a shared love for the great novelist Ross Macdonald and became friends.

Now we’re sitting in Bestseller, a coffee shop in the National Bible Society on Dawson Street in Dublin whose dark-panelled, book-lined walls make it the perfect location to mark the publication of the 17th Charlie Parker novel, A Book of Bones. In the intervening years Connolly has also published three other novels for adults (including perhaps his best loved work, The Book of Lost Things, and he, his inspired fictional biography of Stan Laurel), two collections of short fiction, three YA novels, a science-fiction trilogy written with his partner, the South African journalist and author Jennifer Ridyard, and three volumes of nonfiction.

Those huge advances can now be seen as shrewd investments in a remarkably productive and popular author.


In person Connolly is charming, witty and eloquent, although a certain unease will surface if he is exposed to human company for too long: like many writers, impersonating himself seems to become a strain, and you sense him yearning for the consolations of his art, for the sanctuary of the study. In any case, those books won’t write themselves.

A Book of Bones is a rich mix, almost 700 pages long, infused with English folk mythology and an uncanny feel for landscape and setting, with a delirious, propulsive plot centring around Parker’s attempts to thwart deathless lawyer Quayle’s restoration of the Fractured Atlas, an enchanted book that, once intact, will summon the apocalypse.

Connolly’s potent, turbulent blend of crime and supernatural fiction is on full display, and there is a new stylistic ease, almost an asperity to the prose that he attributes to the experience of writing he. While A Book of Bones marks a culmination of sorts in terms of the Parker saga, it also exemplifies Connolly’s method, where an epic story will play out over a series of volumes.

“Typically mystery fiction tended to thrive on discrete mysteries. I remember Lee Child once saying that Jack Reacher shouldn’t have a memory. It’s very much a commercial decision also, in that if you go into the bookstore and book one isn’t there you’re happy to pick up book seven. And around the fourth or fifth book I went, why does it have to be that way? In other genres, fantasy or science fiction, or historical fiction, we’re quite ready to countenance the idea that readers might be prepared to have a memory, that you can have a sequence of novels. And when I began writing the stories for the second volume of Nocturnes, I wrote a story called The Wanderer in Unknown Realms that introduced the idea of the Fractured Atlas, and I realised, actually this is part of the same universe as the Parker books, and at that point I began to think, where can these two intersect?

“A Book of Bones is the end of a six-novel sequence, starting with The Wolf In Winter, and I knew if it had an English setting, it would enable me to close the circle. My earliest reading was English ghost stories, that tradition of MR James, E Nesbit, and I have a fascination with folk horror, the idea of the past being alive in the present and you can’t really set that kind of book in the United States. I’m interested in psychogeography, the idea that the landscape retains something of the people who pass through, you will stand in a place and almost hear the echo of voices.

“Part of the research for the book involved finding places in the English landscape that gave me that sense, so there are the Beltingham Yews in Northumberland, extraordinary old trees that look like old people in agony; there’s the Wittenham Clumps, they had been Iron Age forts and they found there the bodies of two sacrificed humans and Iron Age people didn’t sacrifice, so something very odd happened there. The ancient nature of some of these structures allowed me to do things that I couldn’t have done in an American setting.”

With movies you were compressing a four hundred page into two hours, but TV has liberated books in that way

I press him on the book’s length, a particular bugbear of mine in contemporary crime fiction (although the truth remains: it’s never too long if, as here, the writing is good enough).

“Last year I spent a lot of time reading 19th-century novels, I reread Bleak House, The Count of Monte Christo, Middlemarch, and I wanted to see if it would possible to create almost a version of those. What I like about Dickens was that he would introduce short stories into the text that would only have a tangential reference to the book, so to some degree the 19th-century novel dictated the structure, in that you come across four short stories in the course of the book that are unmediated, they’re dropped in and you could skim over them but each story adds a little bit to the texture, and each one will have a reference to Quayle, this figure who moves through the books and moves through history.

“Then also, the Fractured Atlas has been dispersed, sewn into other books as a way of trying to get rid of it and the book essentially has fragments of the Atlas in it. So it was always going to be a long book, it was going to range geographically and historically so it needed space.”

In stark contrast, the next Parker novel, The Dirty South, will have no supernatural elements whatever. He has signed up to write the screenplay of The Book of Lost Things for a British film company. And a pilot episode of a Parker TV series is ready to shoot. Having always said he wouldn’t let the books be filmed: “My attitude changed when you could see what was happening in TV – with movies you were compressing a four hundred page into two hours, but TV has liberated books in that way.”

Horror Express, a delightful movie monograph Connolly published last year, explored his fascination with nostalgia. Has he been in retrospective mode for his 20th anniversary?

“I’ve had to go back to Every Dead Thing because the next book is set in the immediate aftermath of that novel. Reading it now all I can see is my 28-year-old self who was the sum of all these influences. I was very much in thrall to James Lee Burke in my first novels, probably my first decade, to his descriptions of landscape, because it awoke something in me. Gradually you undo yourself of those influences.

“There’s a temptation to reverse engineer your career and say, well, there was this great plan, but Every Dead Thing was a rejected book, it was rejected at the halfway stage by almost everybody, and although hugely frustrating and hurtful, it was a very liberating moment, because if you have nobody telling you, we’ll publish it if you do this, if you only have an agent telling you, actually, you’ve kind of screwed yourself up here because they’ve all read it and they don’t want it but I like it and you need to follow this path and see where it’s going.

“That’s the moment when the supernatural elements began to appear. I didn’t really know it wasn’t typical; for me it seemed a natural thing to do, take two genres that I loved and meld them together. And it’s been said to me that I damaged my career commercially by mixing genres like that, but I made decisions that were creative, not commercial, and I’m content with those decisions and with the level of readership I have. And I can do things like The Book of Lost Things, like He.”

Enviably, for a writer, he can do whatever he wants. “Of making many books there is no end, and much study is a weariness of the spirit,” Ecclesiastes tells us. No such weariness is evident in John Connolly. He’s good for another 20 years at least.