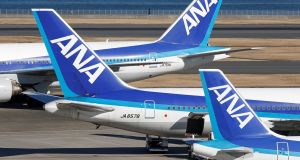 All Nippon Airways (ANA), Japan’s biggest airline, hopes to boost its share of the Irish market, according to its chief executive, Yuji Hirako.

ANA was named Airline of the Year at the ATW Airline Industry Achievement Awards ceremony in Dublin’s Mansion House on Tuesday.

“Japan will host the Rugby World Cup 2019 and the Olympic and Paralympic Games in 2020,” he said.

“We expect an increase in public interest in Japan as a destination, and the surge of both business and leisure traffic. ANA is planning to expand its network extensively foreseeing this growth.”