Rising rates could be threat to Irish aviation leasing business 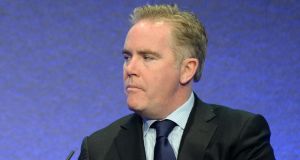 Avolon’s Domhnal Slattery: “In Ireland we have to transition from the quick buck, the quick deal, to building companies that are going to be worth $1 billion and have a global presence.” Photograph: Eric Luke

Speaking after addressing the Irish Student Enterprise Forum at the Royal Dublin Society on Thursday, Mr Slattery acknowledged that rising borrowing charges could hit the aviation leasing business, which is a key contributor to the Republic’s economy.

“It’s going to shake out some of the less well-hedged and less well-funded lessors,” Mr Slattery predicted.

He added he was not talking about the industry’s top 10 players, which include his company, along with other Irish-based businesses such as Aercap and SMBC, but the next tier down, largely made up of smaller, more recently established firms.

Mr Slattery indicated that any shake-up could come within a year. He explained that there was generally an 18-month lag between rates beginning to increase and any visible impact on his industry.

“If you ask me when did interest rates start going up? I would say about six months ago in earnest,” he said.

Addressing the enterprise forum, Mr Slattery said that since he formed Avolon in 2010, just one Irish company, his own, had floated on New York´s Nasdaq market, while 29 businesses from Israel, a comparably sized company, did so.

He argued that this was because Irish entrepreneurs did not set out to build large-scale global businesses, but instead focused on raising money, executing their strategy and selling on quickly.

“In Ireland we have to transition from the quick buck, the quick deal, to building companies that are going to be worth $1 billion and have a global presence,” he told the audience. He acknowledged that investors in this country had a role to play in that, and pointed out that many of them lacked expertise on bringing companies to public markets.

The Irish company had $1.4 billion in capital to start with and the backing of a number of private equity and sovereign investors. It launched on the New York stock market in December 2014.

Within a year, China’s Bohai Leasing, part of the giant HNA group, bid $31 a share for Avolon, buying it in January 2016.

Avolon recently reported that revenue rose 129 per cent to $2.4 billion (€1.95 billion) last year and full-year profit after tax increased by 59 per cent to $550 million, a record for the firm

Total capital stood at almost $15 billion, which included $9.75 billion debt. It had a $5 billion of cash and undrawn debt at the beginning of this year.

1 How much state pension will I get next year?
2 Oxford Covid vaccine trials offer hope for elderly
3 Ulster Bank to introduce new card payment controls on app
4 How long can Government afford to keep State pension age at 66?
5 Investors unnerved by Brexit, Covid-19 and US election jitters
6 Covid-19 will worsen shortage of accountants, says CPA Ireland
7 Death of Samsung chairman sparks hopes for shake-up
8 Sustainable investment: How your pension can help tackle climate change
9 Irish start-up Wayflyer raises €7.8m in seed funding
10 The baroness with grande distribution in her blood
Real news has value SUBSCRIBE