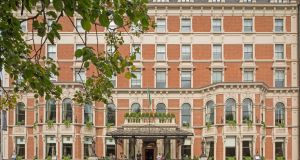 The facade of the Shelbourne Hotel following a restoraton project.

Dublin’s iconic Shelbourne Hotel has completed the refurbishment of its rooms and facade and now plans to embark on projects to upgrade other internal spaces.

Having completed the final phase of its guest room upgrade led by Guy Oliver, the group is planning for future investment in larger spaces including the Lord Mayor’s lounge, the ballroom, and a raft of meeting rooms.

The most recent project began with the restoration of the hotel’s 193-year-old facade, followed by a refit of its suites and rooms overlooking St Stephen’s Green.

While the exact figure for the work was not disclosed, it was understood have cost new owners Kennedy Wilson tens of millions. Speaking to The Irish Times, Yvonne Donohue, the hotel’s sales and marketing director, said the work coupled with future investment plans demonstrates the company’s commitment to the Shelbourne.

Commenting on the hotel’s rates, Ms Donoghue said they are “very much in line with the other five star hotels in the city”.

In terms of outlook for next year, Ms Donoghue said advance demand from the US is “very strong”, while growth is also expected from the domestic market.