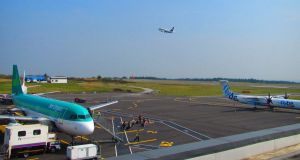 Ireland West Airport Knock was the biggest beneficiary of capital grants on this occasion. The airport was awarded more than €1.1 million.

The capital grants are to be used for safety- and security-related projects and are granted where an airport would not be in a position to recoup the cost of a particular project without Government support.

In the first quarter of this year, Knock airport carried 134,221 passengers while Kerry carried just over 59,000. Figures for Donegal Airport were not available, while Waterford did not carry any commercial flight in the first three months of this year.

A spokesman for Kerry Airport commended the Department of Transport, saying it had been “very supportive of funding requirements of airports”.

Ireland West Airport Knock chairman Joe Kennedy echoed that sentiment, saying the funding would “assist the airport in undertaking important safety- and security-related projects and the upgrade of existing equipment at the airport in 2017”.

Commenting on today’s grant allocation, Mr Ross said it demonstrate the Government’s “continuing financial support for safety and security measures at these airports”.