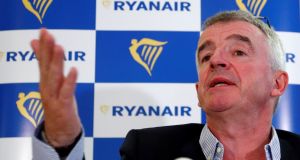 Ryanair chief executive Michael O’Leary: “I think we’re entering into what I describe this morning as a grim winter.” Photograph: Francois Lenoir/Reuters

With fares falling, oil prices up almost 45 per cent on the year, and the threat of industrial strikes lingering after a summer of discontent there were few obvious excuses in Ryanair’s first-half report on Monday for investors to climb aboard.

But having lost as much as a quarter of its value so far this year, the stock was due a relief rally as chief executive Michael O’Leary stuck to his full-year forecast, having warned on profits only three weeks ago.

For Mark Simpson, an analyst at Goodbody Stockbrokers, the “positive” in Ryanair’s interim report is the fact that the company seems to be drawing a line of support under its current profit projection, “which should provide a platform for investors who have been nervous about further downside”.

The warning at the start of month – only weeks after Ryanair’s annual general meeting – saw the company slash its full-year net profit forecast by 12 per cent to €1.1 billion-€1.2 billion, citing rising fuel costs, weaker fares and rising labour costs as a result of high-profile strikes by pilots and cabin crew.

The picture hasn’t improved in the last few weeks. But this is the type of environment in which O’Leary usually comes into his own – highlighting how Ryanair will prosper as rivals fail.

“I think we’re entering into what I describe this morning as a grim winter,” the chief executive told analysts on a call. “It’s not related to Ryanair or unions, it’s related to excess capacity and certainly our willingness to continue to lower air fares into this winter. If there’s going to be a fare war, we want to lead this and win it.”

The market lapped it up, sending Ryanair’s stock, which had been wallowing around two-year lows, soaring by as much as 5.6 per cent.

“There appears to be a clear strategy of Ryanair being fare competitive into a period of rising fuel prices, as it seeks to win further market share in tough trading conditions – as it has done successfully in the past,” said Simpson. “As such, [the second half of the financial year] remains about positioning the business for the medium term.”

Some 90 per cent of Ryanair’s fuel needs over the next 12 months are hedged at the equivalent of $68 per barrel, below the current spot price of about $80. O’Leary said that Norwegian, for example, is only 15 per cent hedged, while Wizz is about 41 per cent.

“The good news of having lower fares is that we can sell more and more cheap fares than anybody else and put further pressure on the competition over the coming months,” O’Leary warned.

O’Leary is also betting that the industry’s woes will dampen gung-ho elements in trade unions that the carrier has been forced to recognise in recent times.

“There’s been a shortage of pilots in the last 12 months [across the industry],” O’Leary said. “I think that shortage is ironing itself out, particularly as more and more airlines suffer casualties.”