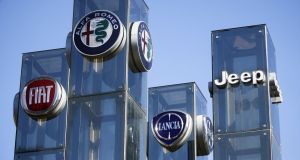 The Fiat Chrysler settlement includes $311 million in total civil penalties to US and California regulators.

Fiat Chrysler Automobiles NV has agreed to a settlement worth about $800 million to resolve claims from the US Justice Department and state of California that it used illegal software that produced false results on diesel-emissions tests, but still faces an ongoing criminal probe.

The hefty penalty is the latest fallout from the US government’s stepped-up enforcement of vehicle emissions rules after Volkswagen AG admitted in September 2015 to intentionally evading emissions rules.

The Fiat Chrysler settlement includes $311 million in total civil penalties to US and California regulators, up to $280 million to resolve claims from diesel owners, and extended warranties worth $105 million.

Fiat Chrysler said in a statement that “the settlements do not change the company’s position that it did not engage in any deliberate scheme to install defeat devices to cheat emissions tests.” The company did not admit liability.

“You wouldn’t pay $311 million total dollars to the federal government in civil penalties if there were not a serious problem,” US assistant attorney general Jeff Clark told a news conference.

The settlement also includes $72.5 million for state civil penalties, and $33.5 million in payments to California to offset excess emissions and consumer claims.

German auto supplier Robert Bosch GmbH, which provided the emissions control software for the vehicles, also agreed to pay $27.5 million to resolve claims from diesel owners. Owners will receive an average of $2,800 to obtain software updates as part of the emissions recall, Fiat Chrysler said.

Elizabeth Cabraser, a lawyer for the owners, said the “substantial cash compensation” will ensure that consumers get the recall fix.

Bosch, which also provided diesel emissions software to Volkswagen, also agreed to pay $103.5 million to settle claims with 47 US states that said the supplier “enabled” the cheating and should have known its customers would use the software improperly, the New York Attorney General’s Office said.

Bosch said in a statement it did not accept liability or admit to the factual allegations, but that the settlement reflects “Bosch’s desire to move forward and to spare the company the very substantial costs and the burden on the company’s resources that would be required to litigate these issues.”

The Justice Department said the settlement does not resolve an ongoing criminal investigation into Fiat Chrysler’s conduct, but officials declined to discuss the status. The US Securities and Exchange Commission is also investigating.

US regulators are also investigating Daimler AG for alleged excess emissions in Mercedes-Benz diesel vehicles, but the Justice Department and Environmental Protection Agency declined to comment on the status of the probe - and would not say if any other automakers are under scrutiny.

Daimler declined to comment Thursday but has acknowledged it faces investigations in Germany and the United States. In October, Daimler said operating profit would fall by more than 10 per cent, blaming “government proceedings and measures in various regions” in referencing diesel emissions issues.

US regulators said the industry was getting a tough message.

“Today’s settlement sends a clear and strong signal to manufacturers and consumers alike - the Trump administration will vigorously enforce the nation’s laws designed to protect the environment and public health.”

The Justice Department said Fiat Chrysler must work with one or more vendors of aftermarket catalytic converters to improve the efficiency of 200,000 converters that will be sold in the 47 US states that do not already require the use of the California-mandated high-efficiency gasoline vehicle catalysts. That is estimated at $50 million to $70 million, officials said.

California Attorney General Xavier Becerra said in a statement, “Fiat Chrysler tried to evade these standards by installing software to cheat emissions testing. The company not only violated the law and our trust, but did so at the expense of our environment.”

US principal deputy associate attorney general Jesse Panuccio said at a news conference that automakers were on notice: “If you cheat our emissions tests you are going to get caught.”

Fiat Chrysler has agreed to an enhanced whistleblower program and the company must implement corporate governance, organization and technical process reforms to minimize the likelihood of future Clean Air Act violations and must hire a compliance auditor to oversee and assess the reforms.

With the Fiat Chrysler settlement, the US Justice Department’s total civil fines for both Fiat Chrysler and Volkswagen are now valued at around $2,500 per vehicle.

In total, Volkswagen agreed to pay more than $25 billion in the United States for claims from owners, environmental regulators, states and dealers, including spending as much as $15 billion to buy back about 500,000 polluting US vehicles. The company pleaded guilty to three felony counts to resolve the criminal probe.

The settlement will be open for public comment for 30 days before a federal judge decides whether to approve the agreements. – Reuters

1 Wetherspoon’s panto-villain chairman may have the last laugh
2 British exceptionalism backfires in style as Johnson tests positive for coronavirus
3 UK needs to be honest about its Covid-19 strategy
4 Will Covid-19 force Primark to rethink decision not to sell online?
5 Retail landlords worried rents will dry up during Covid-19 crisis
6 Remote working doesn’t suit everyone, and it exposes woolly leadership
7 Mobile, broadband suppliers to be given extra radio spectrum
8 Interim examiner appointed to food distribution companies
9 ECB orders banks to freeze dividends and share buybacks
10 Rivian takes on Tesla with big batteries and subtler approach
Real news has value SUBSCRIBE