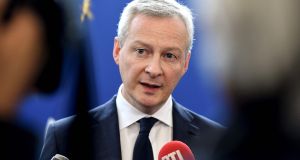 The European Union must lead the way on taxing global technology companies by adopting legislation early next year that would ensure they pay billions of euros in taxes in Europe, French finance minister Bruno Le Maire said in an interview.

Digital giants such as Google, Facebook and Amazon are in Europe often taxed on profits booked by subsidiaries in lower-tax countries such as the Republic or Luxembourg even though their revenues are earned across the union.

French president Emmanuel Macron’s government has proposed taxing the tech giants on revenues rather than profits – an idea that has been poorly received in the United States as well as some European countries.

“It’s not possible, not sustainable, that we tax manufacturing industries while billions in profits earned by GAFAs on European soil evaporate,” Mr Le Maire said, referring to Google, Apple, Facebook and Amazon by the acronym commonly used in Europe.

“We want a fair taxation of digital giants that creates value in Europe in 2019,” he said.

He said draft legislation would be based on proposals the European Commission is expected to set out soon.

Italy, Germany and Spain, together with France, are spearheading the push for tax reform. They face resistance from smaller nations who are a hub for those firms’ investments and fear changes could hurt their economies.

On Monday, the Minister for Finance, Paschal Donohoe said a growing number of EU member states shared its concerns.

“Kissing the feet of GAFAs won’t ensure our prosperity,” Mr Le Maire said, without naming any country. He urged Europeans to stand up for the bloc’s values and said tech giant taxes should be financing roads and schools.

Asked what level of taxation he targeted, Mr Le Maire said that it should be in the billions of euros annually.

“European citizens would struggle to understand why the taxation of digital giants at a European level only raised tens of millions of euros. They would see that as a provocation and they would be right.”

Facebook said in December that it would start booking advertising revenue locally instead of re-routing it via its international headquarters in Dublin. But Mr Le Maire insisted taxation of publicity revenues was not enough.

The French government is open to taking profits into account for taxation if ongoing work at the OECD group of industrialised nations showed that to be feasible and fair, he said. “But we won’t be slowed down or blocked by technicalities,” he added.

The Republic wants any tax reform to be coordinated at a global level and found an ally in Hungary, while also boosting alliances with Nordic and Baltic states.

EU states could have lost €5.4 billion in tax revenues from Google and Facebook between 2013 and 2015, according to an MEP’s report.

While the European Commission has pledged to follow the lead of the OECD, it has also kept open the option of acting unilaterally.

Amazon said on Monday it had settled a long-running dispute with French tax authorities, who have been seeking nearly €200 million from the online retail giant. France opened the door to negotiating settlements in long-running tax cases after it lost a court case against Google.