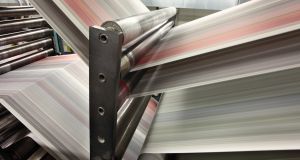 The newspaper was initially launched in September 2015 as a digital-only product. Photograph: iStock

Most of the editorial staff at the Times Ireland edition will be made redundant as the title moves ahead with a major reorganisation.

“We are proposing a return to selling the international edition in print but no final decisions have been made and the Sunday Times in Ireland is unaffected,” publisher News Corp UK & Ireland said in a statement.

The Times Ireland was initially launched in September 2015 as a digital-only product designed for consumption on tablet computers. New subscribers were offered an iPad for signing up, while the title announced a reduced subscription rate of €5 a month earlier this year.

A print edition went on sale in June 2017 and the title added to the number of journalists it employed, hiring young reporters in particular. Production of the newspaper took place in London, where the Rupert Murdoch-owned publisher is based.

Times Ireland, edited by Richie Oakley, had built up 10,000 digital subscribers by mid-2017, the company said.

The most recent figures from the Audit Bureau of Circulations, for the month of April, show that the print edition had an average circulation of 3,363 copies.

This compared to a circulation in the Republic for the Times of 2,544 in May 2017, the month before it was replaced by the Irish-edited Times Ireland.

Print circulation of the Times Ireland had exceeded 10,000 in the summer of its launch, but this was supported by multiple copy sales to hotels and other establishments, which the publisher withdrew over time.