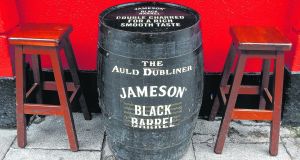 Irish Distillers, the company behind Jameson, has entered the podcast game, releasing a five-part series called A Story of Irish Whiskey. The move is part of an international trend whereby brands try to reach new audiences through the fast-growing medium and content that they publish themselves. It follows the arrival of a Ryanair travel podcast last month.

The series, which the Pernod Ricard-owned business will launch today, tells the story of “the rise, and fall and rise again” of the Jameson, Powers and Murphy families from 1966 onwards.

Produced by Irish digital content specialists LastCast Media, it makes use of both dramatisation techniques and audio recordings from the company’s archive in Midleton, maintained by archivist Carol Quinn.

Rosemary Garth, director of communications, said Irish Distillers hoped the series would reach listeners who are interested in history and Ireland, not only whiskey drinkers. “It’s a toe in the water for us,” she said.