Even a limited release in China is ‘massive’, says Kilkenny’s Cartoon Saloon 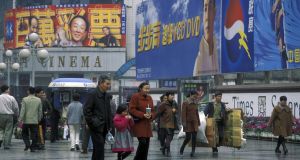 The Chinese arthouse market stretches to some 2,000 cinemas. Photograph: iStock

The Chinese film market isn’t just an opportunity for Hollywood blockbusters is the message emerging at this week’s China Ireland International Film Festival, taking place at Dublin cinemas and the UCD Confucious Institute.

The inaugural festival aims to “open a new chapter of Sino-Irish cultural exchange”. For the filmmakers present, that means cracking an arthouse market that stretches to some 2,000 cinemas.

“There are a few barriers to entry before you get in, but it is worth it,” said Cartoon Saloon co-founder Paul Young. “A limited release in China is still valuable, because even a small release there is so massive.”

Cartoon Saloon has worked with the Beijing-based China Nebula (CNB) group on bringing its pre-school television series Puffin Rock to Chinese audiences, and having garnered more than 100 million views on China’s digital media network Tencent, it is now exploring the possibility of a Puffin Rock feature.

Mr Young also cites the “great deal” struck last year by Cartoon Saloon managing director Gerry Shirren with Shenzhen-based V&P Media to come on board as a co-investor in forthcoming feature Wolfwalkers. “It’s the first time we have had a Chinese partner in that early,” he said.

Wolfwalkers, which is expected to be on the new Apple+ on-demand platform, is about a young English girl called Robyn who comes to medieval Ireland to hunt demonic wolves. “That’s very exotic to the Chinese market.”

The festival, which concludes on Saturday, is designed as a cultural exchange. Chinese films, including catalogue highlights from the China ChangChung Film Group Corporation, are being screened at Cineworld, the Light House cinema and UCD’s campus in Belfield.

Two Irish films, Song of the Sea and musical love story Once, will also be shown and these will then be among the Irish productions to travel to China for the second leg of the festival in 2020.

Mr Young, who was speaking to The Irish Times ahead of a panel discussion at the festival on Wednesday, believes there is “great potential” for other Irish production companies to win business in China, where audiences are “hungry for authentically told stories”.

While Beijing operates a system of quotas for foreign films, these have become more relaxed in recent times.

“It is not only Hollywood blockbuster films that can do business there,” he said, adding that “one of the nicest screenings” he ever attended was for Song of the Sea in China.“The kids just loved it, for whatever reason.”