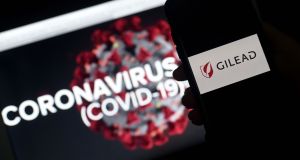 Global stocks rallied on Friday on hopes of a potential drug to treat Covid-19. Photograph: Olivier Douliery/AFP via Getty Images

Global stocks rallied on Friday on US president Donald Trump’s plans to revive the coronavirus-hit US economy, and hopes of a potential drug to treat Covid-19.

The Iseq all-share index was the standout European performer on Friday, climbing 3.83 per cent. A report suggesting a coronavirus drug developed by Gilead Sciences had shown positive results in a clinical trial buoyed stocks around the world on the day.

Airlines were a benefactor of the news, with Irish-owned Ryanair closing up 7.3 per cent at €10.06.

The biggest gainer of the day was Paddy Power-owner Flutter Entertainment, which jumped 14.8 per cent to close at €102.95. The stock is up 72 per cent since its March lows. In a trading update on Friday, Flutter detailed the effects of Covid-19 on sportsbetting, but also said that it enjoyed an “excellent revenue performance” in the quarter, driven by “strong active customer growth” in Australia and the US.

Iseq heavyweight CRH underperformed slightly compared to the broader market, rising 2.6 per cent to €25.51 on Friday.

The commodity-heavy FTSE 100 index closed up 2.8 per cent, boosted by oil majors BP and Royal Dutch Shell, which added 4 per cent and 5.5 per cent respectively.

The more domestically focused FTSE 250 midcap index closed up 3.1 per cent, with travel and leisure stocks, among the worst hit this year, up 6.3 per cent. Cineworld surged 21.4 per cent.

Real estate agent Foxtons surged 22 per cent after issuing new shares and furloughing about 750 employees to shore up its finances.

Hotel operator Whitbread rose 4.8 per cent after confirming it was able to access the government’s funding facility.

European markets were equally excited by the Gilead news – with the French CAC 40 up 3.4 per cent and German Dax 30 up 3.2 per cent – helped by recent announcements of restrictions being eased in Italy, Spain and Austria. The pan-European Stoxx 600 index rose 2.63 per cent.

In company news, Just Eat Takeaway was among the losers as investors reacted to news that the UK competition watchdog had approved investment from Amazon to its food delivery platform rival Deliveroo. Shares in Just Eat Takeaway closed down 250p at 7,784p as the Competition and Markets Authority said it was provisionally approving the deal because officials warned Deliveroo would go bust without the cash due to the lockdown.

Airbus rose 6.77 per cent after it said it would furlough around 3,000 staff across three French sites.

Boeing’s shares soared 11.9 per cent on plans to restart commercial aircraft production after halting operations last month due to the coronavirus pandemic.

The S&P 500 has now regained about 30 per cent from a March trough and is set for its third weekly gain in four.

Gilead surged 8.2 per cent following a report that patients with severe symptoms of the disease had responded positively to its experimental drug remdesivir. With no treatments or vaccines currently approved for the coronavirus, the news lifted global equity markets.

Bank stocks bounced back after four straight days of losses on reporting several billion dollars in reserves to cover potential loan defaults. Financial stocks were the top boost to the S&P 500.

Amazon.com and Netflix eased slightly from record highs after surging this week on strong demand for online streaming services and home delivery of goods.

Apple fell 2.4 per cent as Goldman Sachs downgraded the stock, expecting iPhone shipments to drop 36 per cent during the third quarter due to coronavirus-related lockdowns. – Additional reporting: Reuters