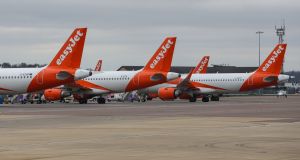 EasyJet aircraft grounded at Luton Airport on March 30th. The company’s stock rose 15 per cent on the FTSE 100 on Tuesday. Photograph: Jonathan Brady/PA.

European shares rallied for a second straight day on Tuesday with investors focusing on early signs that the coronavirus pandemic may be easing.

The Stoxx 600 index was at its highest level in almost a month as German shares led the charge.

The Iseq closed up almost 2 per cent, having traded 3.5 per cent higher earlier in the session. Index heavyweight Ryanair added 5.3 per cent to finish at €10.26 on a good day for travel stocks, while there were also rebounds for food companies and banks.

The internationally focused FTSE 100 settled 2.2 per cent higher, pulling back from an early rise of 3.5 per cent as a surging pound weighed on exporters.

EasyJet jumped 15 per cent, while Carnival shot up 22 per cent after Saudi Arabia’s sovereign wealth fund disclosed an 8.2 per cent stake in the coronavirus-hit cruise operator.

The pan-European Stoxx 600 finished 1.9 per cent higher, having risen as much as 3.3 per cent earlier. In Germany, the Dax closed up 2.8 per cent, while the French Cac 40 advanced 2.2 per cent. Spanish stocks rose 2.3 per cent as coronavirus deaths slowed for a fourth day on Monday.

German shares reached their highest point since March 11th, as data showed industry output in Europe’s manufacturing powerhouse rose by a stronger-than-expected 0.3 per cent in February, before the pandemic prompted sweeping lockdowns. However, analysts said output would likely tumble in the next three months.

French aerospace company Thales became the latest major company to slash its dividend and suspend profit forecasts. Its shares rose after it had signed a new €2 billion ($2.17 billion) credit facility to shore up liquidity, but the stock finished down 0.6 per cent.

Wall Street rose in early trading on tentative signs of the coronavirus outbreak plateauing in some of the biggest US hot spots and hopes that social distancing measures are working to stop the spread of the virus.

The S&P 500 was set for its biggest two-day gain in nearly two weeks, building on a 7 per cent jump on Monday, as health officials also revised down dire projections of the US death toll.

Gains were led by the energy, financials and materials sectors, with an aggressive round of US fiscal and monetary stimulus in the past month also boosting risk appetite, although some analysts cautioned that the rally was premature.

Energy giant Exxon Mobil throttled back a multi-year investment spree in shale, LNG and deep-water oil production, saying it would cut planned capital spending this year by 30 per cent as the pandemic saps energy demand.

Oilfield services company Halliburton said it would cut about 350 jobs in Oklahoma and that its executives would reduce their salaries. Exxon and Halliburton shares jumped 5 per cent and 7.4 per cent respectively. – Additional reporting: Reuters