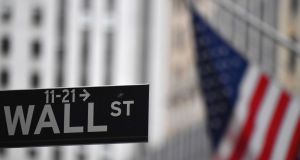 The Dow Jones Industrial Average, S&P 500 and Nasdaq all rose in the first hours of trading in New York. Photograph: AFP via Getty

European shares rose on Wednesday, as investors shrugged off the previous day’s heavy losses for US technology stocks as well as rising fears that the UK will leave the European Union without a trade deal.

Equity gains extended as Wall Street opened and showed signs of recovering from its recent sell-off, with even the much-battered tech stocks in positive territory in early trading as buyers came back into the volatile market.

The Iseq rose 1.1 per cent in line with the calmer trend across European markets, reversing the losses recorded in Tuesday’s session.

Bank of Ireland rallied 2.8 per cent to just under €1.96, while building materials group CRH, the largest stock on the index, was another climber, adding 1.7 per cent to €31.55. Ryanair also managed to post a gain, shaking off an early dip to finish up 2 per cent at €11.84, notwithstanding declines for other airlines.

Other stocks were more subdued, however, with Dalata Hotel Group down 2.9 per cent at €3.01, and real estate investment trust stock Hibernia Reit edging 0.5 per cent lower to €1.11.

The FTSE 100 added 1.4 per cent, with exporters climbing as sterling dropped again, while the more domestically focused mid-caps on the FTSE 250 nudged 0.2 per cent lower.

Irish exploration company Tullow Oil saw its shares tumble 17.5 per cent after it warned of a potential cash shortfall. The company reported a writedown-driven loss of $1.3 billion (€1.1 billion) for the first half of the year.

Pharmaceutical giant AstraZeneca added 0.5 per cent on its London listing despite the news that it has paused global trials of its experimental Covid-19 vaccine due to an unexplained illness in a study participant.

British American Tobacco and Imperial Brands rose 3.6 per cent and 2.6 per cent respectively, helped by the weakness in the pound. Unilever was also a key climber, with the consumer goods giant advancing 3.8 per cent.

The benchmark Stoxx 600 index finished the day up 1.6 per cent as equities advanced in key markets. In Frankfurt, the Dax added 2.1 per cent, while in Paris, the Cac 40 advanced 1.4 per cent. Italian and Spanish stocks also rose.

Among individual stocks, Volkswagen gained 5.3 per cent, while German pharma company Bayer added 1.1 per cent, but Norwegian Air and Deutsche Lufthansa joined in the declines for airlines, falling 1.7 per cent and 1.3 per cent respectively.

French electricity giant EDF, which sank 8 per cent on Tuesday after announcing a steep drop in nuclear output, recovered 4.8 per cent.

The Dow Jones Industrial Average, S&P 500 and Nasdaq all rose in the first hours of trading in New York, as tech stocks clawed back some of their heavy losses.

Apple, Amazon and Microsoft were all trading more than 4 per cent higher, while Facebook and Google parent company Alphabet were up about 2 per cent.

Electric car manufacturer Tesla, which fell by a record 21 per cent on Tuesday, was trading up almost 5 per cent by 5.30pm Irish time.

Boeing, which fell 5.8 per cent in the previous session, was in the red again on Wednesday. It was reported earlier this week that Boeing 787 Dreamliner aircraft may have a newly disclosed manufacturing flaw. – Additional reporting: Reuters / Bloomberg.