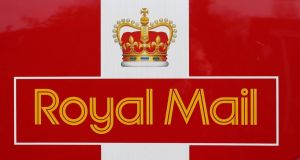 European shares fell on Tuesday on fears the UK was in danger of leaving the European Union without a trade agreement, with energy companies and technology stocks among the biggest decliners.

The Iseq all-share index slipped by 0.47 per cent on Tuesday with banks, travel stocks and property names taking hits.

Bank of Ireland led losers on the day, dropping 6.25 per cent to €1.90 while peer AIB fell by a more modest 1.93 per cent to €1.07. Though there was little in the way of stock-specific news, the falls came on a day when Permanent TSB said it was making refunds of legal costs, averaging €2,400, to almost 400 borrowers who had been in arrears in the past, following a review of legacy cases.

Elsewhere, Ryanair dipped 1.69 per cent to €11.60 after British peer EasyJet said it was reducing its flying schedule as a result of a hit in demand caused by frequent changes in government travel restrictions.

Glenveagh Properties shed 2.1 per cent of its value to close at 70 cent despite saying it had capacity to deliver 1,000 units next year and closed 123 unit sales in the first half of this year, raising €37 million in revenue.

The blue-chip Ftse 100 index ended 0.1 per cent down, with oil major BP weighing the most after crude prices slid on fears of waning demand.

Data analytics company Experian was among the top boosts to the index after it raised its second-quarter revenue forecast on strength in its US mortgage business.

The domestically inclined mid-cap index fell 0.1 per cent as losses in consumer discretionary and industrial stocks were offset by gains in Royal Mail and livestock genetics firm Genus, which surged more than 10 per cent on better-than-expected annual earnings.

Royal Mail topped the mid-cap index, marking a record gain after it said revenues could be much higher than previously expected if Britain can avoid another nationwide lockdown, thanks to a surge in online shopping deliveries.

In earnings-driven news, sportswear retailer JD Sports Fashion surged nearly 10 per cent to a more than six-month high after reinstating its annual outlook.

Travis Perkins, the UK’s largest distributor of building materials, fell 6.6 per cent as its profit sank 81 per cent in the first half of the year.

The pan-European Stoxx 600 slid 1.2 per cent, with declines in French energy group Total and German enterprise software maker SAP dragging down the index.

French electricity giant EDF sank 8 per cent after announcing its nuclear output fell 17.6 per cent in August due to the effects of the pandemic and reactor outages.

The oil and gas sub-index tumbled 3.7 per cent, marking its worst day in nearly 11 weeks, as oil prices plunged more than 8 per cent on demand worries. As tech firms on Wall Street deepened a sell-off from last week, European tech stocks slipped 2.1 per cent, giving back a chunk of the previous session’s gain.

The Nasdaq tumbled on Tuesday as investors dumped high-flying technology stocks, while Tesla tracked its worst day in nearly six months after a surprise exclusion from the S&P 500.

Tesla plunged another 15.4 per cent to a three-week low after the electric-car maker was excluded from a group of companies being added to the S&P 500.

General Motors jumped 8.7 per cent after it acquired an 11 per cent stake, worth $2 billion, in US electric truck maker Nikola. The truck maker’s shares surged 37 per cent. – Additional reporting: Reuters