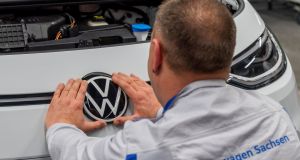 Lawyers backed by US and British investors have launched a last-minute offensive against Volkswagen (VW), spending tens of millions of euro to lure claimants away from a settlement VW has offered over the emissions cheating scandal.

It comes as the company announced on Monday that it had reached settlements with 200,000 of the 260,000 claimants participating in a class action lawsuit brought by German consumer group VZBV over the carmaker’s rigging of diesel emissions tests.

A further 21,000 cases were still being reviewed for possible payouts of €1,350-€6,250 per car and the deadline for participating in the settlement has been extended to April 30th, VW said. The exact amount depends on the age and model of the owner’s car.

VW will pay out a total of €620 million to customers whose vehicles were fitted with “defeat devices” to cheat diesel engine emissions tests. It had set aside €830 million to cover the costs of settlements with all participants of in the VZBV class action. The deal marks a further step in the German carmaker’s efforts to make amends after it admitted in 2015 to using illegal software to cheat US diesel engine tests. The effort has cost the company more than $30 billion (€27 billion) in vehicle refits, fines and provisions.

Nearly all US owners of affected cars agreed to take part in a $25 billion settlement in 2016 in the United States, but VW has said there was no legal basis for consumers in Germany to seek compensation due to differences in law.

But the carmaker could now face a flurry of new individual claims, as “no-win, no-fee” lawyers sign up tens of thousands of German consumers.

In advertising campaigns on Google and social media, law firms have been targeting VW claimants, offering thousands of euro in upfront compensation, and promising to ultimately win much more overall from the carmaker.

Mr Goldenstein insisted it is successful in “almost 100 per cent” of “dieselgate” claims, and wins an average of €17,510 in compensation. Many of Goldenstein & Partner’s claims are funded with the help of US litigation finance business Burford Capital.

However, the coronavirus pandemic is making it harder for law firms to convince claimants to abandon the settlement.

“People are now short of cash, many have been made redundant, or are furloughed, so they are happy for any compensation they can get,” said Christopher Rother, a lawyer who has signed up 12,000 individual claimants, 90 per cent of whom were in the original collective lawsuit.

The VZBV has warned claimants “not to blindly trust the advertising promises of litigation financiers”.

It cautioned that these firms may take a large commission, and that their success will depend on the outcome of a case that will be heard at Germany’s federal high court on May 5th. If VW loses that case, it could trigger tens of thousands of new cases, at a time when the company is struggling with the effects of the pandemic. – Copyright The Financial Times Limited 2020/Reuters