Inside Business podcast: Global tax debate an awkward one for Ireland

‘It might be legal there, but that’s because very little is illegal there’ 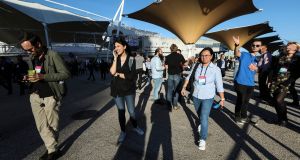 Attendees at the Web Summit in Lisbon.

Colm looks at the details of the Irish cases found among the cache of leaked documents, while Richard explains the unusual way in which the Isle of Man has managed to fund itself while offering a zero per cent corporate tax rate.

They also discuss our own status in the international tax community. How realistic is an international approach to thwarting tax avoidance, and what role should Ireland play?

Richard Murphy is professor of practice in international political economy at City University, technical director of the Fair Tax Mark and director of Tax Research UK. Colm Keena is legal affairs correspondent with The Irish Times.

In part two, our reporter Charlie Taylor reports on the clever robots and gregarious AI systems that, along with tens of thousands of techie humans, populate this year’s Web Summit in Lisbon.

Applegreen sees revenues fall more than a quarter 08:21
ESB swings from profit to loss due to impact of Covid-19 08:04
Gabriel Makhlouf: ‘A full second lockdown would be very serious for the economy’ 07:35
Ulster Bank could close, consumers remain cautious, and Decathlon booms 06:30
Mark Paul: Government faces dilemma on which businesses to save 06:09

1 NatWest considers closing Ulster Bank in the Republic
2 Mark Paul: Government faces dilemma on which businesses to save
3 Ulster Bank could close, consumers remain cautious, and Decathlon booms
4 Has NatWest finally run out of patience with Ulster Bank?
5 TikTok weighs plan for up to 5,000 workers in Dublin offices
6 Almost 300,000 customers visited Decathlon since June opening
7 ‘I just thought it sounded exciting and different’
8 ESB swings from profit to loss due to impact of Covid-19
9 Career path blocked by Covid? Time to take a new direction
10 How Ireland managed to green the White House
Real news has value SUBSCRIBE