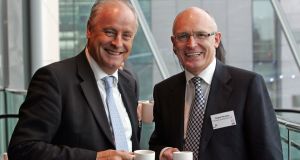 Maurice Pratt (left), Uniphar chairman, said the IPO would give the company great confidence as it moves forward.

Pharmaceuticals company Uniphar has raised its target of €150 million ($169 million) in the first initial public offering (IPO) on the local bourse this year, the pharmaceutical wholesale and retailing group said on Friday.

The listing was a boost for Euronext Dublin, formerly known as the Irish Stock Exchange, after a number of flotations were postponed following global market turbulence towards the end of 2018, shortly after Euronext bought the bourse.

The year before that Dublin was home to the largest IPO in Europe when the Irish government raised €3.4 billion by returning over a quarter of Allied Irish Banks to private hands in 2017.

Uniphar, formed in 1994 through the merger of United Pharmacists Co-op and Allied Pharmaceutical Distributors, will use the capital from the placing to pay for acquisitions, growth and to reduce debt.

Its shares will start trading in London and Dublin on Wednesday at a price of €1.15 per ordinary share, giving it a market capitalisation of €310 million.

“Today marks a major milestone in the 50-year history of Uniphar and cements our transformation from a pharmaceutical wholesaler focused on the Irish market to an international healthcare services business,” chairman Maurice Pratt, one of Ireland’s best known retail chiefs, said in a statement.

“The level of interest generated from institutional investors in support of our IPO gives us great confidence as we embark on the next phase of Uniphar’s growth as a public company.”