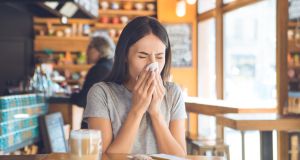 Oranmore-based Neurent stand on the cusp of breaking into a multibillion dollar market with their runny nose treatment. Photograph: iStock

Raising $25 million (€20.6 million) for a cure to runny noses is impressive. But the bigger news for Oranmore-based Neurent is that they stand on the cusp of breaking into a multibillion dollar market with a truly Irish success story.

An application to market the company’s Neuromark device in the massive US market is currently before the Food and Drug Administration with a decision expected in the next couple of months.

David Townley, with a career in medical device R&D, first met cofounder Brian Shields, a management consultant in the healthcare sector, at BioInnovate, the centre for medical technology innovation at NUI Galway.

Shadowing ear, nose and throat surgeons, they identified rhinitis – the chronic runny nose – as an area of unmet medical need and, with Enterprise Ireland support, came up with a prototype of a device that might treat it.

Spinning out of NUIG, the rookie entrepreneurs secured some big-name backers in an €11 million funding round back in 2018 – Atlantic Bridge and Ireland’s Fountain Healthcare as well as a who’s who of medtech industry veterans in Galway.

Now they have secured European heavyweight Life Science Partners as lead investors in a funding round expected to see them through to 2023 when they expect to be booking sales in the tens of millions of dollars across the US market. Pilot commercialisation begins as soon as the FDA gives the green light.

The arrival of Life Science Partners is notable as it was instrumental in the later-stage funding and ultimate sale of another Galway business, stroke therapy group Neuravi, in 2017. And the man who steered Neuravi to a takeover by Johnson & Johnson, Eamon Brady, sits on the Neurent board.

“The Neurent team have executed to a very high standard, right on the needle with respect to milestone achievement on time and on money spent,” one of those early investors said on Wednesday. “The technology is simply superb, bang on the sweet spot they are intending to address.”

Getting the commercialisation right will keep those shareholders happy and with an array of exit options open to them.