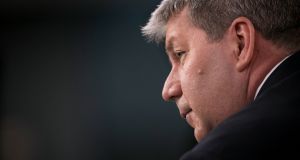 Mike Pearson: hard-driving boss Valeant boss ensured the group has, over the past eight years, bought one drug company after another. Photograph: Scott Eells/Bloomberg

What is the right way to build up a drug company? Do you take the traditional route, investing in your own research and development and seeking to discover the remedies that you intend to sell?

Or is it smarter simply to dispense with all that tedious effort and buy other pharmaceuticals businesses? Then you not only get to skip the development time and uncertain expenditure. You can also jack up prices for proven medicines and so maximise the value of each portfolio that you acquire.

Until recently, the modish answer in the US was to go for the latter option. The best example of the “buy not build” tendency – Valeant Pharmaceuticals – was also one of North America’s fastest-growing drug companies. (The tabular content relating to this article is not available to view. Apologies in advance for the inconvenience caused.)

Under its hard-driving boss, Mike Pearson, the group has, over the past eight years, bought one drug company after another, including well-established businesses such as eyecare group Bausch & Lomb, and the gastrointestinal treatment specialist, Salix Pharmaceuticals.

It seemed an infallible model. Valeant snapped up the target, funded largely by debt. Costs were stripped out largely by shutting down research and development, which was kept to a tiny proportion of sales (3 per cent as against the 15 to 20 per cent normal for drug groups). It then raised prices to maximise the value of what it had bought.

Valeant has taken maximum advantage of the licence it has been given. It has acquired a reputation for ferocious increases. This year alone the company has raised the price of 81 per cent of the drugs in its portfolio, by an average of no less than 66 per cent.

It would be nice to say these practices were unusual. But they have attracted imitators, and not just among companies that share Valeant’s yen for roll-up acquisitions, such as Endo Pharmaceuticals. Higher prices have become the norm across the industry.

Take generic drugs, which account for nearly 80 per cent of all US prescriptions. According to the research firm Elsevier, out of 4,421 drug groups, the price of 222 increased 100 per cent or more in the year to November 2014.

Indeed so ubiquitous is the price raising that the tactic has started to suffer from the law of diminishing returns.

Not only are politicians now complaining on behalf of their constituents. The Democratic presidential challenger, Hillary Clinton, has floated the idea of capping prices to stop patients being ripped off.

Aggressive pricing is also encouraging insurance companies to accelerate consolidation. The two latest deals – Anthem’s purchase of Cigna and Aetna’s for Humana – could reduce the number of big health insurers to just three. That may spell higher rates for consumers. But it would at least also bolster insurers’ buying muscle when it comes to purchasing drugs.

Insurers are already taking a tougher line. Some drug companies have responded by adopting more aggressive sales strategies. These include teaming up with pharmacies to take the reimbursement hassle off those doctors who are willing to prescribe high priced remedies. In some cases, it even means underwriting the cost of their own medicines if the insurers would not ultimately pay.

But the practice also prompts questions about how much of the price rises actually feed through to sales. Mr Pearson has given the numbers for one drug whose sticker price Valeant recently lifted by 20 per cent. The actual increase realised by the company was just a tenth of that amount.

Short-term returns are ultimately critical, of course, because Valeant is in reality a pharmaceutical company in name only.

Its true role is more akin to the sort of corporate raider that swept through rust belt America in the 1980s, the objective being principally to strip the capital patiently built up by companies over many years.

Such strategies depend critically on two criteria: a high multiple and a ready supply of undervalued prey.

Valeant’s plunging stock price has certainly put paid to the former. Less clear is the damage it and its imitators have inflicted on the broader pharma sector.

Relatively unfettered pricing has made America the capital of global drug research. Dent public confidence and you risk changing that – at a cost to innovation. In the long run that can only harm the interests of patients around the world.