Government urged to offer up to 90% SME loan guarantee 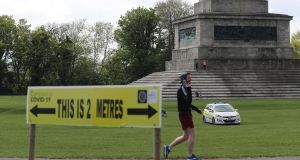 Banking and Payments Federation Ireland (BPFI) has called on the Government to set up a scheme offering up to 90 per cent guarantees against lending to small and medium-sized businesses (SMEs) to aid a recovery of the economy from the Covid-19 pandemic.

SMEs across the industry, construction, distribution and services sectors face a funding requirement of as much as €6 billion to €8 billion, BPFI has said in a new paper. However, relaxing the assumption to only half of small firms needing liquidity support would lower the level of loans requiring State backing to €3 billion to €4 billion, it said.

BPFI is also urging the Government to improve its Covid-19 working capital loan scheme, make it easier and less expensive for SMEs to go down the examinership route to secure more company survivals, and review commercial rates for service companies operating in tourism and hospitality, which have been severely hit by the crisis.

“The normal criteria used by financial institutions to evaluate loan proposals will not work in the current economic climate resulting from the pandemic due to the abnormal risks attached to such lending,” the BPFI paper said. “Government guarantees of emergency loans made by banks to temporarily Covid-19 distressed, but otherwise creditworthy, borrowers would directly address the problem.”

The Department of Public Expenditure and Reform secretary general, Robert Watt, signalled earlier this month that the Government is looking at enhanced SME guarantee schemes, open-ended grants, and cases for equity capital support as it plans for the next stage in the economic battle.

The UK government moved this week to offer full guarantees for emergency loans of up to £50,000 (€57,375) for small companies hit by the Covid-19 shock. Loans between this amount and £5 million will remain subject to an 80 per cent guarantee announced last month.

Countries such as Germany and Switzerland have introduced schemes offering full state guarantees for loans to SMEs.

BPFI is proposing that the Government stands behind 90 per cent of loans to micro enterprises of up to €50,000, falling to 80 per cent for loans to SMEs of as much as €5 million. Such loans would be interest free for the first 12 months and have repayment terms of up to 10 years.

BPFI said a guarantee programme would still require banks to underwrite loans “to safe and sound standards”, based on the borrower’s financials prior to the crisis. “A guarantee of most of the principal can significantly reduce the lender’s exposure to the current pause in activity, which in turn will increase lending capacity of banks,” it said.