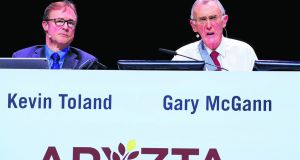 Spanish activist investor Cobas Asset Management, the largest shareholder in Swiss-Irish baked goods group Aryzta, is back. And this time it’s got company.

Cobas mounted a campaign in 2018 against the group’s plan at the time to raise €800 million in a rescue share sale – arguing that tapping shareholders for half of that money alongside an extensive asset sales programme and a debt refinancing should be pursued instead.

However, the plan of Aryzta chairman Gary McGann and chief executive Kevin Toland was approved narrowly by shareholders that November, giving the company breathing space to reduce net debt and start unpicking and restructuring a corporate machine that had been built up over a decade of roll-up deals by former management.

Cobas revealed this week it had joined forces with another activist player, Zurich-based Veraison Capital, which has accumulated a 7.3 per cent stake in Aryzta. The two will use their combined 17.3 per cent holding to pursue what they euphemistically refer to as “constructive dialogue”.

“The shareholder group believes that Aryzta trades at a significant discount to the intrinsic value,” Veraison said in a statement, adding that the market value of the owner of Cuisine de France has “decreased significantly” compared to the overall market since the 2018 share sale.

“Trust in Aryzta must be rebuilt. The shareholder group is convinced that the food industry offers sustainable value creation potential even in the environment currently shaped by Covid-19,” it said. “The shareholder group believes that Aryzta should be more focussed and significantly reduce the complexity of the group.”

In fairness, Toland had been making headway since taking over a deeply troubled ship in late 2017, overseeing almost €400 million of asset sales, reducing net debt, and pursuing a cost-cutting programme designed to deliver €200 million of savings in the three years to July 2021.

However, the asset disposal programme has come at a massive cost. The 2018 sale of the problem Cloverhill Bakery facilities in Chicago was at a deep discount.

Earlier this year, Aryzta completed the disposal of most of its 49 per cent stake in French frozen foods group Picard for €156 million. Adding in special dividends resulting from a Picard refinancing in the past few years, the total amount recovered comes to €247 million.

But even allowing for Aryzta retaining a 4.5 per cent stake worth €16.3 million, it all falls well short of the €447 million Aryzta spent buying into Picard five years’ ago.

The asset sales and emergency capital raise have allowed the group reduce its reported net debt to less than two times earnings before interest, tax, depreciation and amortisation (Ebitda) from almost four times in the middle 2018. However, this ignores almost €900 million of subordinated debt, including deferred interest payments (as of the company’s latest annual report in July 2019).

The value of these bonds, which have no maturity date, have fallen sharply in recent months, with 400 million Swiss francs of notes issued in 2013 currently trading at less than 60 US cents on the dollar, compared to almost 90 cents in February. What does that tell us about the market’s view of the sustainability of the debt?

Shares in Aryzta, meanwhile, have fallen 70 per cent far this year and are down almost 85 per cent from where they were trading at the time of the 2018 rights issue. The entire market value of the company now is about €305 million, some 60 per cent of what was raised at the time.

Covid-19, of course, has had a massive impact on the business. The group said in late April that it was cutting costs – including executive salaries – as lockdowns globally hit orders from quick-service restaurants and the catering industry. Aryzta’s lenders have eased its debt covenants to give it headroom.

But it was becoming increasingly clear even before the pandemic raised its ugly head that all was not well. The group revealed in early March that it was cutting margin forecasts for its North American unit and taking a €437 million goodwill charge.

Aryzta came out late on Wednesday – hours after Veraison threw down the gauntlet – to announce that it had already hired Rothschild & Co last month to review “all strategic and financial options” by the end of July.

It’s hard to see much appetite for another share sale to underpin the group’s finances. This leaves further asset sales as the most likely outcome. Will Aryzta be recognisable when it’s all done?

ARE DEBT OR STOCK MARKETS RIGHT ON BANKS?

Bank of Ireland, whose shares have slumped almost two-thirds in the past two months amid concerns over Covid-19 on its business and all-important capital reserves, is having less trouble in the riskiest part of the debt markets.

The bank launched a surprise sale of €675 million of subordinated debt, known as Additional Tier 1 (AT1) notes, on Thursday, attracting orders for twice the amount of debt that was on offer. It is the first European bank to venture into this market in recent months.

These bonds, which carry a 7.5 per cent interest rate, are first in line to face losses if the bank’s capital levels are in danger of falling below regulatory requirements.

Bank of Ireland reported on Monday it fell into a loss in the first quarter as it began to take loan impairment charges for an expected surge in bad debts. Still, it said that, even in an unexpected scenario of gross domestic product (GDP) falling by 10-12 per cent this year, its capital levels should bottom out above regulatory requirements.

“We view Bank of Ireland’s ability to reopen the European AT1 issuance market as a strong statement of support from the credit market and it further highlights the recent divergence between equity and credit market sentiment,” said Diarmaid Sheridan, an analyst with Davy.

Taxpayers, who own 14 per cent of the bank, will hope the debt market is right.

1 In six months we will be in the grip of a 1980s-style recession
2 Apple tax case: Four individual lawyers paid over €500,000 each
3 Aer Lingus wants quarantine period axed to resume flights in July
4 Google facing $5bn lawsuit for tracking in ‘private’ mode
5 Should my mam wait for house prices to drop before buying?
6 Dublin aircraft lessor defers delivery of Boeing 737 Max until 2025
7 C&C’s business ‘materially impacted’ as it books €92.5m in exceptional items
8 Australia’s economy is in recession for first time since 1990s
9 Nissan warns of threat to UK factory Brexit talks fail to agree trade deal
10 Ryanair forecasts ‘minimal traffic’ in June as restrictions remain across Europe
Real news has value SUBSCRIBE