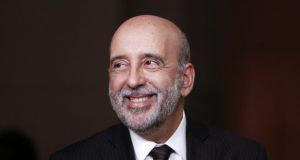 The Department of Finance said the controvery would not affect Gabriel Makhlouf’s appointment.

The head of New Zealand’s public service watchdog, Peter Hughes, said he is considering taking further action in the case of treasury secretary Gabriel Makhlouf, the incoming governor of the Central Bank of Ireland.

The New Zealand government expects Mr Hughes to address quickly the issue of Mr Makhlouf’s conduct in a controversy over leaked budget details.

Finance minister Grant Robertson declined to comment on whether he has pressed Mr Makhlouf to resign. He said Mr Makhlouf has not offered his resignation.

As a chief executive within the civil service Mr Makhlouf is accountable to government ministers. However, the state services commissioner is responsible for issues of job performance.

State Services has already called an inquiry into the data breach at Treasury. Although its exact terms of reference have not yet been set, the department said its purpose is to consider only Treasury’s information security; Mr Makhlouf’s conduct is a separate matter.

National leader, Simon Bridges, said Treasury was “sitting on a lie” after saying it was hacked on Tuesday. He said Mr Maklouf “either knew or ought to have known” the information was legally obtained.

Mr Makhlouf’s conduct, rather than the actual leak, raises the most concern, according to Jordan Williams, executive director of the Taxpayers’ Union. “The cover-up is worse than the cock-up,” Mr Williams said. “It is clear he [Mr Makhlouf] misled New Zealanders...he must resign.”

Dr Bryce Edwards, political scientist at Victoria University Wellington, said the situation is “very serious,” for Mr Makhlouf. “There’s a problem of deception and with Makhlouf more than anyone else. It’s not going to be fixed by an apology.”

The inquiry called by State Services is expected to run over a period of months. The department has not yet appointed someone to lead it.

“This is an important issue because it goes to the trust and confidence in the public service and in the security of government information,” Mr Hughes said.

Mr Robertson said Mr Makhlouf apologised to him for the data breach.

Mr Makhlouf is slated to leave his job at Treasury on June 27th and take up his position at the Central Bank of Ireland on September 1st. He will succeed Philip Lane, who is moving to a post with the European Central Bank next month.

A spokeswoman for the Minister for Finance Paschal Donohoe said the controversy would not affect Mr Makhlouf’s appointment as governor of the Central Bank.

Mr Makhlouf has been the subject of opposition criticism in New Zealand already this year. In February, his department revealed it had placed a dollar value on facets of social wellbeing including friendship and good neighbours. National called the effort irrelevant.

However, the budget details released on Thursday were largely eclipsed by the furore, first over allegations of hacking, and later over the acknowledged lapse of security at Treasury and allegations of a cover-up.