Paul Krugman: Trumponomics are like one long senior moment 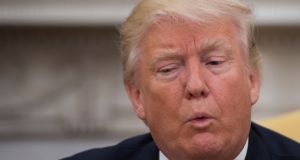 Donald Trump: ignorant or deeply out of it?

Donald Trump has said many strange things in recent interviews. One can only imagine, for example, what the US’s military leaders thought about his rambling, word-salad musings about how to improve our aircraft carriers.

Over here in Econoland, however, the buzz was all about Trump’s expressed willingness, in an interview with the Economist, to pursue tax cuts even if they increase deficits, because “we have to prime the pump” – an expression he claimed to have invented. “I came up with it a couple of days ago and I thought it was good.”

Actually, the expression goes back generations – FDR used it in a 1937 speech – and has been used many times since, including several times by Trump himself. What’s more, it’s a bad metaphor for modern times.

Twenty years ago, in a paper warning that Japanese-style problems might eventually come to the US, I urged that the phrase be withdrawn from circulation: “Since hardly anybody in the thoroughly urbanised societies of modern America and Japan has any idea what it means to prime a pump, I hereby suggest that we rename this the jump-start strategy.”

But why should anyone besides pedants care? First, a mind is a terrible thing to lose. Senior moments, when you can’t remember a name or phrase, or misremember where it came from, happen to many of us. But that Economist interview was basically one long senior moment – and it wasn’t very different from other recent interviews with the commander-in-chief of the world’s most powerful military.

Second, we’re talking about some really bad economics here. There are times when temporary deficit spending can help the economy. In the first few years after the 2008 financial crisis, for example, unemployment was very high, and the Federal Reserve – normally our first line of defence against recessions – had limited ability to act, because the interest rates it controls were already very close to zero.

That was a time for serious pump-priming; unfortunately, we never got enough of it, thanks to scorched-earth Republican opposition.

Now, however, unemployment is near historic lows; quit rates, which show how confident workers are in their ability to find new jobs, are back to pre-crisis levels: wage rates are finally rising; and the Fed has begun raising interest rates.

The US may not be all the way back to full employment – there’s a lively debate among economists over that issue – but the economic engine no longer needs a fiscal jump-start. This is exactly the wrong time to be talking about the desirability of bigger budget deficits.

True, it would make sense to borrow to finance public investment. We desperately need to expand and repair our roads, bridges, water systems and more. Meanwhile, the federal government can borrow incredibly cheaply: long-term bonds protected from inflation are paying only about 0.5 per cent interest. So deficit spending on infrastructure would be defensible.

Trump’s fiscal delusions are arguably no worse than those of many, perhaps most professional observers of the Washington political scene

But that’s not what Trump is talking about. He’s calling for exploding the deficit so he can cut taxes on the wealthy. And that makes no economic sense at all. Then again, he may not understand his own proposals; he may be living in an economic and political fantasy world. If so, he’s not alone.

Which brings me to my third point: Trump’s fiscal delusions are arguably no worse than those of many, perhaps most professional observers of the Washington political scene.

If you’re a heavy news consumer, think about how many articles you’ve seen in the past few weeks with headlines along the lines of “Trump’s budget may create conflict with GOP fiscal conservatives”.

The premise of all such articles is that there is a powerful faction among Republican members of Congress who worry deeply about budget deficits and will oppose proposals that create lots of red ink.

But there is no such faction, and never was. There were and are poseurs such as Paul Ryan, who claim to be big deficit hawks. But there’s a simple way to test such people’s sincerity: when they propose sacrifices in the name of fiscal responsibility, do those sacrifices ever involve their own political priorities? And they never do.

That is, when you see a politician claim that deficit concerns require that we slash Medicaid, privatise Medicare, and/or raise the retirement age – but somehow never require raising taxes on the wealthy, which in fact they propose to cut – you know that it’s just an act.

Yet somehow much of the news media keeps believing, or pretending to believe, that those imaginary deficit hawks are real, which is a delusion of truly Trumpian proportions.

So I’m worried. Trump may be not just ignorant but deeply out of it, and his economic proposals are terrible and irresponsible, but they may get implemented all the same. But maybe I worry too much; maybe the only thing to fear is fear itself. Do you like that line?

I just came up with it the other day.