New Mexico looks to encourage Irish businesses to move there 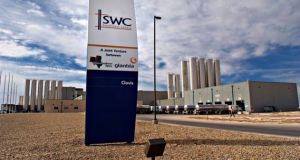 Glanbia has a 50 per cent stake in Southwest Cheese, a joint venture that began operations in Clovis, New Mexico, in 2004.

New Mexico might not seem the most obvious destination for Irish companies looking to establish a base in the US, but the state is going all out to encourage businesses to follow the lead of Glanbia by setting up shop there.

The landlocked state with a population of two million people might still be best known as the place where cult TV series Breaking Bad was filmed but it is busy trying to reinvent itself as a key location for companies establishing a presence in the US.

On a recent visit to Dublin, Edward Herrera, the state’s trade development officer, said Glanbia was one of the key companies it was citing as evidence of the benefit of being based in New Mexico.

The food giant has a 50 per cent stake in Southwest Cheese, a joint venture that began operations in Clovis, New Mexico, in 2004. It announced a $140 million expansion of its cheese and whey production plant there three years ago, in a move that increased milk processing capacity by almost 30 per cent. Southwest Cheese now employs more than 400 people locally.

“Glanbia started out small in New Mexico but grew and grew and Southwest Cheese now controls about 10 per cent of the cheddar cheese production in the US,” said Mr Herrera.

“They told us that one of the things they admired about New Mexico was that, because of its size, they could appeal directly to the governor about any concerns they have and these would be immediately addressed. That isn’t something that would necessarily happen in New York or California,” he added.

While food processing is an industry segment that is big business for New Mexico, which borders Colarado, Arizona, Texas and the Mexican state of Chihuahua to the south, Mr Herrera stressed that businesses from multiple sectors have been drawn to the region.

This he attributed to low tax rates and other pro-business incentives used by the state to draw in companies.

He admitted that New Mexico finds it difficult to compete with other US regions for inward investment and that it doesn’t have the sort of resources that others have for marketing purposes. Nonetheless, it has done relatively well in drawing emerging tech companies in with Meow Wolf, a multimedia firm headquartered in Santa Fe and Descartes Labs, a geospatial analytics spinout from Los Alamos National Laboratory, among other start-ups.

The region is also well known for hosting companies focused on sectors such as energy and resources, aerospace, logistics and advanced manufacturing.

Mr Herrera said New Mexico saw the Republic as something of a role model in how to go about landing foreign direct investment.

“Ireland has done extremely well at punching above its weight in terms of attracting companies in and we’ve definitely looked at how it has gone about things,” he said.

Mr Herrera added that while Irish people might not be too aware of his home state, the region had previously welcomed many people from here.

“The state isn’t that well known but, you know, when Irish immigrants first came to the US, many of them experienced discrimination along the eastern seaboard because they were Catholic. The southwest always offered a more welcoming environment for them though because it was predominantly Catholic there because of the Spanish influence,” he said.

Whether the region can prove to be hospitable to a new wave of Irish people remains to be seen but Mr Herrera said his meetings with business people in Dublin had been positive.

“I’ve had a really positive experience being here and it seems people are very open to the idea of investing in New Mexico.”

6 GAA gets go-ahead for new hotel near Croke Park

8 Insurance broker Lockton to create up to 50 new jobs