EU to be exempt from US steel and aluminium tariffs 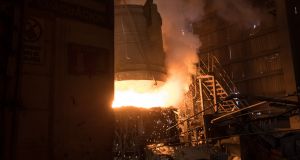 Steel smelting. The EU has suggested to the US that there is a problem with excess steel capacity on world markets and that it is prepared to work with Washington on the issue.

EU steel and aluminium will be exempted from new US tariffs announced by President Trump recently the US administration has confirmed. The decision, announced in the US Senate on Thursday afternoon by US Trade Representative Robert Lighthizer, eliminates the prospect of a dangerous escalation of trade retaliation that was threatening an EU-US trade war.

EU ambassadors and leaders at their summit in Brussels had earlier been briefed on the prospect by EU Trade Commissioner Cecilia Malmstrom who has been in the US over the last few days to meet trade officials including Commerce Secretary Wilbur Ross.

Both sides has agreed to re-establish trade discussions over what the US sees as the excessive €92 billion trade deficit with the union. The US expectation is that these will reduce the deficit, which it will suggest may allow a permanent exemption for the EU from threatened tariffs..

Those discussions have provided the rationale for the US administration to temporarily suspend the EU steel and aluminium imports from the protectionist measures announced recently by President Donald Trump.

The EU has suggested to the US that there is a problem with excess steel capacity on world markets and that it is prepared to work with Washington on the issue. Mr Trump’s main preoccupation is China with whom the US runs a much heftier goods trade deficit of $375 billion.

The White House said Trump would sign a presidential memorandum “targeting China’s economic aggression” this afternoon when it is expected he will announce the EU exemption.

Malmstrom, who met US Secretary of Commerce Wilbur Ross, has been asked by the ambassadors to draft conclusions for the summit which reflect the evolving situation.

The EU leaders are also set to approve a request from France’s President Macron to revive dormant proposal on access to the EU’s procurement market, IPI. Among other provisions are a requirement that European companies tendering for procurement contracts with member states must show that 50 per cent of their supply chain is EU-generated.