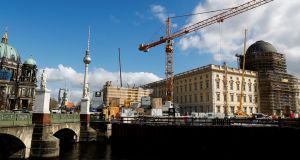 Construction at the Berliner Schloss (Berlin City Palace) Humboldtforum. The mood among German investors improved by much more than expected in March, a survey has revealed. Photograph: Reuters

The mood among German investors improved by much more than expected in March as a potential delay to Britain’s departure from the European Union buoyed sentiment, a survey by the ZEW research institute showed on Tuesday.

The institute said its monthly survey showed economic sentiment among investors rose to -3.6 from -13.4 in February. Economists had expected an increase to -11.0.

A separate gauge measuring investor assessment of the economy dipped to 11.1 from 15.0 in the previous month. Markets had predicted a fall to 11.7.

The stronger-than-expected institute reading bucked a recent run of weak data on the German economy, Europe’s largest, which stalled in the final quarter of last year, just skirting recession.

“Nevertheless, the ZEW Indicator of Economic Sentiment for Germany points to relatively weak growth in the first half of 2019,” said institute president Achim Wambach.

Figures released earlier this month showed industrial orders posted their biggest drop in seven months to January, a sign the economy had a subdued start to 2019.

Earlier in the day a panel of advisers to the German government slashed its growth forecast for this year to 0.8 per cent. The group that advises the German government on economic policy had in November forecast the economy would expand by 1.5 per cent this year. The panel said on Tuesday that economic growth had slowed significantly, partly due to problems in the chemical and auto sectors and warned that a spiral of protectionist measures had the potential to trigger recession.

But Christoph Schmidt, one of the advisers, said: “The German economic boom is over but a recession is not currently expected due to the robust domestic economy.”

The group predicted the economy would grow by 1.7 per cent in 2020. – Reuters