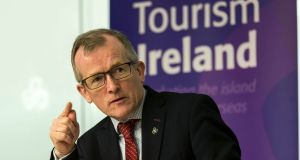 Niall Gibbons, CEO of Tourism Ireland: “We have a reputation as a clean, green island. We want to make sure we keep that.” Photograph: Shane O’Neill

The State’s tourism authorities fear an increase in so-called “flight shaming” could threaten Ireland’s position as a European travel hotspot. About 90 per cent of all inbound tourists to Ireland arrive by air. Tourism Ireland, which markets the entire island abroad, says 2019 was a “mixed bag” for Irish tourism. Mark Paul reports on its review of this year and its plans for the next.

Good news on the jobs front. Aircraft maintenance specialist Lufthansa Technik could create up to 150 jobs in a new operation that it is planning for the Republic, it has emerged. Barry O’Halloran reports the company, part of German airline and aviation giant Lufthansa, intends opening a new operation in Celbridge, Co Kildare.

This week, the Central Bank pulled the covers off the motor insurance business and its large profits. In his column, Ciarán Hancock argues that “if your insurer hits you with a premium increase in the coming weeks, don’t just take their usual spin on a rising claims environment. Challenge them on the facts.”

Staying with motor insurance, the Competition and Consumer Protection Commission says its investigation into whether motor insurers and brokers have engaged in anti-competitive practices by openly signalling premium price moves is at an “advanced stage”.

Irish banking stocks fell in Dublin on Tuesday as the Bank of England ordered lenders with businesses in the UK hold additional capital to absorb losses in the event of a sudden downturn. Sentiment towards the sector was further dented as UK prime minister Boris Johnson put the threat of a non-deal Brexit back on the table.

Meanwhile, the number of credit unions in the Republic has fallen to 241 from 406 in 2011, as the industry succumbed to a wave of mergers as it grappled with a slump in lending and income pressures.

In light of all the controversy over Irish Rail coffee cups, an Irish packaging company, Zeus, says it is rolling out a recycling scheme for cups across 80 O’Briens and Bagel Factory outlets from January 2020. Peter Hamilton has the details.

Joe Brennan reports on how African oil executive Samuel Dossou-Aworet has built up a stake of just over 7 per cent in Tullow Oil, taking advantage of a slump in the oil exploration group’s stock in the past five weeks to become its main shareholder.

Finally, in her series of advice columns for those looking for tech gifts, Ciara O’Brien picks the best of the wireless ear buds on the market this Christmas.