Figuring out the real state of the Irish economy

CSO works hard to get accurate picture, but reading the runes still a big ask 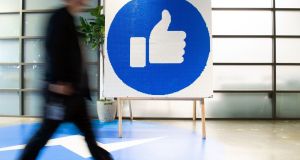 Not surprisingly multinationals account for half of the growth coming from manufacturing, but they account for only half of the contribution to growth from the IT sector. This latter finding is striking as we know about the importance of firms like Google and Facebook, but we hear much less about the domestic firms which are also playing an important role. Photograph: Josh Edelson/AFP

Managing the Irish economy over the last decade has been a complicated process, not least because the normal instruments to guide safe navigation have been severely defective.

It has been rather like driving a car where you know that you are moving forward or in reverse but have no idea of the speed. This has been because the normal statistical instrument, GDP, has been out of action because it was swamped by the activities of large multinational enterprises. The problem came to worldwide attention with 2015’s “leprechaun economics” growth rate of 25 per cent in GDP.

Policymakers have partly overcome this problem by using other reliable indicators such as employment. For example, the fact that jobs grew at an average rate of over 3 per cent a year between 2013 and 2019 makes it clear that economic growth in these years was, indeed, rapid.

To try and overcome this statistics deficit, the CSO has developed other indicators. One of these, Modified Domestic Demand, captures all of the spending in Ireland in a year. It has proved very useful, but it excludes transactions with the rest of the world, which in the Irish case are very important.

A more encompassing measure is Adjusted Gross National Income, referred to as GNI*, which includes trade with the rest of the world. This summer the CSO published figures for the real growth in this indicator between 1995 and 2019. However, even this measure suffers from drawbacks.

It has proved implausibly volatile from one year to another: for 2015, it suggests that national income actually fell in a year when GDP grew by over 25 per cent and employment grew by 3.4 per cent.

Nonetheless, it is useful in providing a summary measure of the national income available to the people of Ireland, and it also provides a reasonable guide to the average growth rate over a period of years.

The other problem with GNI* is that it does not allow us to determine what sectors are driving growth, something of major importance in understanding the underlying strengths and weaknesses of the economy.

To deal with these problems, the CSO last year published new detailed Institutional Sector Accounts, which allow a much better understanding of what is happening in the economy. They produced the latest version of these a month ago, covering the years up to 2019.

The one problem for users is that these data need a lot of analysis to extract the key messages, as I described in a recent paper for the ESRI.

Real Net National Product, based on the Institutional Sector Accounts, provides a good measure of economic activity, much better than the alternatives, such as GDP. It includes the effects of trading with the rest of the world, it is much less volatile and hence more plausible than GNI*, and it allows us to quantify the contribution to growth by multinationals and domestic business, as well as the contribution of different industrial sectors.

Not surprisingly multinationals account for half of the growth coming from manufacturing, but they account for only half of the contribution to growth from the IT sector

The picture which these latest data paint is of an economy growing very rapidly between 2013 and 2019 – at about 5 per cent a year. With employment growing at 3 per cent a year over this period, this implies a growth in productivity, namely output per person employed, of 2 per cent a year.

Not surprisingly multinationals account for half of the growth coming from manufacturing, but they account for only half of the contribution to growth from the IT sector. This latter finding is striking as we know about the importance of firms like Google and Facebook, but we hear much less about the domestic firms which are also playing an important role.

Unfortunately, these data are not available for the current year, which poses special difficulties for policy.

The latest data show output over the first three quarters of this year unchanged compared to last year, while modified domestic demand is down by 5 per cent. The latter figure feels much more realistic.

The normal alternative measure of domestic activity, employment, is also severely affected by the current crisis. Many people are technically neither employed nor unemployed because they are furloughed.

A better guide to the real impact on work and economic activity is given by the CSO’s findings that over the first nine months of this year, hours worked fell by 5.4 per cent.

The CSO has shown considerable versatility to help us find out what is going on in the real economy. Nonetheless reading the runes is still not an easy task.