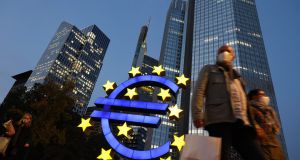 The ECB increased the size of its pandemic emergency purchase programme from €1.35 trillion to €1.85 trillion. File photograph: YANN SCHREIBER/AFP via Getty Images

The European Central Bank has launched a fresh burst of stimulus to help the euro-zone economy recover from the coronavirus pandemic, promising to buy €500 billion more bonds over a longer period and providing extra cheap funding for banks.

The ECB increased the size of its pandemic emergency purchase programme (PEPP) from €1.35 trillion to €1.85 trillion and pushed back the end of its main crisis-fighting tool from next June until at least March 2022, while reinvesting any proceeds until at least the end of 2023.

Christine Lagarde, ECB president, said that if the economy recovered quickly from the pandemic the full amount of the PEPP “need not be used in full”, but it could be expanded further if required.

The central bank also extended until June 2022 its offer to finance banks at deeply negative rates as low as minus 1 per cent – in effect paying them to borrow money – provided they maintain the flow of credit.

The euro zone economy will contract 2.2 per cent in the fourth quarter and the downturn will continue into early next year, Ms Lagarde said, adding that inflation remained “disappointingly” low.

Although “risks remain tilted to the downside”, they had “become less pronounced” since vaccines started to be rolled out, she said. “We have good reasons to believe that by the end of 2021 we will have achieved sufficient herd immunity so that ... the economy will begin to function under more normal circumstances,” she added.

Paul Diggle, economist at Aberdeen Standard Investments, said Ms Lagarde’s comments had “an unhelpful whiff of hawkishness”, including her suggestion that PEPP may not be fully spent and her remark that ECB funding for banks had become “slightly more challenging”.

The pandemic plunged the euro zone into its deepest recession for a generation and a double-dip downturn is expected in the final three months of 2020 after a fresh surge in infections.

The ECB cut its euro-zone growth forecast for next year to 3.9 per cent and assumed there would be no post-Brexit trade deal between the UK and EU. But it raised its forecast for 2022 to 4.2 per cent, while predicting growth of 2.1 per cent in 2023.

It also lowered its inflation forecast. It expects prices to rise 0.2 per cent this year, with the pace of growth increasing to 1.4 per cent in 2023 – but that is still well under its target of just below 2 per cent.

The ECB kept its deposit rate unchanged at minus 0.5 per cent while extending many measures into 2022, including recently loosened collateral requirements and refinancing facilities for commercial lenders and other central banks.

“I understand what they are trying to do – giving markets more confidence – but I don’t think it will be enough and it is quite likely they will have to come back and do more,” said Randall Kroszner, a former US Federal Reserve governor who is now deputy dean of the University of Chicago’s business school.

Frederik Ducrozet, strategist at Pictet Wealth Management, called the decisions “underwhelming” and a sign of “compromise between dovish and hawkish members of the governing council”.

Euro-zone sovereign bonds fell slightly and the euro rose against the US dollar after the announcement.

Ms Lagarde said the ECB would continue to monitor the exchange rate “very carefully”; the euro recently hit its highest level against the dollar for more than two years, threatening to weigh on inflation and exports.

Katharina Utermöhl, economist at Allianz, said monetary policy was no longer “in the driving seat” and fiscal policy was “the game-changer” – in particular the EU’s planned €750 billion recovery fund.

The central bank said its objective was “preserving favourable financing conditions over the pandemic period, thereby supporting the flow of credit to all sectors of the economy, underpinning economic activity and safeguarding medium-term price stability”.

There are worries that ECB policies are having a diminishing impact as interest rates are at record lows and a growing amount of euro zone government debt is priced at a negative yield. Spain on Thursday issued a 10-year bond with a negative interest rate for the first time. – Copyright The Financial Times Limited 2020