FDI investment to the Republic to fall by 20% this year 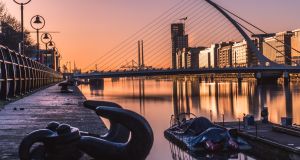 The US continues to be the most active investor country for Ireland, accounting for 61% of 2019 projects. File photograph: iStock

Some 20 per cent of foreign direct investment (FDI) projects in the Republic won’t proceed as planned this year because of the Covid-19 crisis, according to EY.

Publishing a new report, the consulting firm said that while the State won’t get as many investments as originally intended, it would still likely fare better than many other European nations.

EY said it expected 80 per cent of FDI-planned projects to be realised this year, as against a European average of 65 per cent.

The news comes as the State climbed two places to eighth position out of 47 countries in a ranking of most attractive European locations for FDI.

It also comes as the State retains first place for the greatest number of FDI projects per million population.

Following an exceptionally strong performance in 2018 when 205 projects were realised in the Republic, investments fell by 7 per cent last year.

“While a reduction in the total number of projects may attract attention, it’s important to note that Ireland’s strategy has been to focus on the value and quality of the FDI it attracts rather than the volume. The new projects secured reflect an extension of the investor and project base, with 61 per cent representing new projects, rather than solely building on past successes,” said Feargal De Freine, partner and head of FDI at EY Ireland.

“Furthermore, Ireland’s performance in 2019 continues to reflect a marked improvement of over 40 per cent when compared with 2017, pointing to the sustainability of the country’s attractiveness,” he added.

Unsurprisingly, the US continues to be the most active investor country for Ireland, accounting for 61 per cent of 2019 projects. While attracting US multinationals has been a recipe for success, EY’s analysis shows that investment projects from European companies into other European countries represented more than half of FDI in the past three years.

The business services, digital and finance sectors attracted the most FDI locally last year, collectively accounting for 69 per cent of all new projects.

Respondents surveyed by EY ranked cleantech first in terms of its potential to drive economic growth across Europe in the coming years. Digital and healthcare and wellbeing projects are also expected to be big drivers.

“Notwithstanding the current challenges, we believe we have an opportunity to build on Ireland’s proven strengths to secure our long-term attractiveness to investors,” said Mr De Freine.

IDA Ireland will likely be relieved that most projects will be proceeding this year given that its chief executive, Martin Shanahan, was warning of a probable decline in FDI investments even before the coronavirus pandemic hit.

Mr Shanahan suggested in January that FDI levels would likely become more subdued due to factors including slowing growth, the advent of an international digital tax regime, and rising protectionism.

France became Europe’s top destination for investment last year, at the expense of the UK, which lost its top rank for the first time. France attracted 1,197 new projects last year, a 17 per cent annual increase on its 2018 performance. Despite Brexit uncertainty, FDI in the UK climbed 5 per cent to 1,109 projects, placing it second in the rankings.

Germany was in third place with 971 projects and Spain in fourth with 486 investments, a 55 per cent increase on the prior year.

Among the other top 10 European FDI destinations, countries recorded mixed performance with Belgium, Poland, Russia and Turkey all seeing a decline in projects, while the Netherlands recorded an 11 per cent increase.