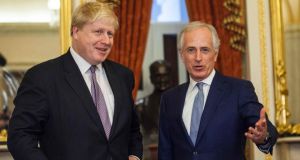 Meetings with the president-elect’s advisers and congressional leaders in the US on Sunday and Monday showed enthusiasm for an agreement, Mr Johnson told the House of Commons in London on Tuesday.

“There was a huge fund of goodwill for the United Kingdom on Capitol Hill, a large measure of understanding that now is the time to do a free-trade deal,” Mr Johnson said, hours after his return from a whirlwind visit to New York and Washington. “They want to do it fast and that understanding was most vivid on behalf of the incoming administration.”

The UK is seeking to build new ties ahead of its exit from the EU, and prime minister Theresa May and Mr Trump plan to meet early this year.

Mr Johnson’s report of the enthusiasm for a trade deal marks a contrast with the stance of outgoing President Barack Obama, who said during the Brexit referendum campaign that Britain would be “at the back of the queue” for such an accord if it voted to leave the bloc.

“We hear that we’re first in line to do a great free-trade deal with the US,” Mr Johnson said in a video statement released before his appearance in parliament. “It’s going to be a very, very exciting year for both our countries.”

“My enthusiasm is nothing compared to the enthusiasm of our friends on the other side of the Atlantic,“ Mr Johnson told MPs. “We will get a good deal, but it’s got to be a good deal for the UK as well.”

Senator Corker, who chairs the Senate foreign relations committee, said the UK would “take a front seat,” the BBC reported. It would be the US priority to “make sure that we deal with them on a trade agreement initially but in all respects in a way that demonstrates the long-term friendship that we’ve had for so long,” the broadcaster quoted him as saying.

Johnson said he also discussed relations with Russia during his talks in the US and told MPs that it was “pretty clear” that the hacking of Democratic Party computers was carried out by the Russians.

Britain cannot sign a trade deal until it leaves the EU, which under current plans will likely be in 2019. – (Bloomberg)