Are the no-deal economic realities starting to worry the DUP? 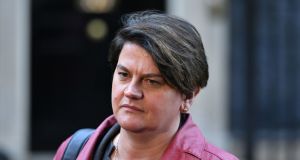 DUP leader Arlene Foster. Her party are in talks with the UK government to find a way for them to support the withdrawal agreement. File photograph: Dominic Lipinski/PA Wire

There was a feeling in Dublin that the tariff regime outlined by the UK government in the event of a no-deal Brexit was designed, in part at least, to put pressure on the Government to give some ground on the backstop. Exports in key sectors such as beef would be in the firing line. However we can expect that the announcement will also have put pressure on the DUP, whose business supporters will surely have been pointing out the reality of what was announced.

Many businesses in the North had supported the backstop plan to which the DUP has been so stridently opposed. For them it would have offered clear access to the UK and EU markets, albeit with the price of some additional bureaucracy – particularly on goods entering from Britain – and a willingness to operate under rules set in Brussels.

In contrast, the plan outlined for the North by the UK government after a no-deal Brexit would be hugely disadvantageous for businesses in Northern Ireland. By allowing goods tariff-free through the Border, it would open them to competition, while they would face tariffs selling into the EU. Checks crossing the Irish Sea would also be necessary. It seems like an unworkable mess designed purely to avoid Border checks – and to put pressure on the Irish Government and the EU to outline what they would do.

But it will also have turned up the heat under the DUP. Because if you were an owner of a small business or a farmer in the North you would rightly be worried and very annoyed about how this is going.

Coincidentally – or not – the DUP are now in talks with the UK government to see if a way can be found for them to support the withdrawal agreement, when it comes back to the Commons next week. It is not clear what changes are possible in the backstop plan, given that the EU side has said there will be no more talking. But the economic realities must surely be intruding in the minds of the DUP, as they try to balance this against their political red lines.