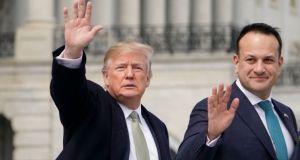 Taoiseach Leo Varadkar is due to meet with US president Donald Trump on Thursday.

Irish companies Netwatch and RelateCare are to create a combined 280 new jobs in the US, with a number of other businesses from the Republic also announcing major expansions stateside.

The news came ahead of an Enterprise Ireland business leadership roundtable event in Washington chaired by Taoiseach Leo Varadkar.

Figures collated by the State body confirm that investment by Irish companies in the US rose to a record high of $146.2 billion (€129 billion) last year. This marks a 72 per cent increase on the €85 billion recorded in 2017.

These figures make the Republic the ninth largest source of foreign direct investment (FDI) to the US.

Enterprise Ireland said there are more than 100,000 people employed by Irish companies in the US, of which 85,000 are its client companies, operating across 954 locations in all 50 states.

Among the Irish companies that have a significant presence in the US are Glanbia, Kerry Group, CRH Oldcastle and clinical trials company, Icon.

To further drive the growth of Irish exports to the US, Enterprise Ireland on Wednesday confirmed plans to open new offices in Seattle.

“Irish investment in the United States is increasing year on year and is now at an all-time high. The scale and diversity of this investment is indicative of the strength of the partnership between our two countries,” said Mr Varadkar, who is due to meet US president Donald Trump later this week as part of the annual St Patrick’s Day visit to Washington.

“Ireland has a dynamic and innovation-based enterprise sector, backed by State investment, which is expanding its presence and impact in the US,” he added.

Carlow-based Netwatch, a provider of live remote monitoring for critical infrastructure security, announced the creation of 100 new US jobs on Wednesday. These are in addition to the 250 roles created by the company in the country last year.

Healthcare technology company RelateCare, which began as a joint venture between the Cleveland Clinic and business process outsource provider Rigney Dolphin, said it plans to create 180 new jobs this year between the Republic and the US as part of a major expansion.

Cork-based IT disposal and data destruction firm Wisetek, which announced new facilities in California and Texas last year, said it intends to expand to a further two locations in 2019.

More than 110 Enterprise Ireland supported companies are participating in business development events and meetings across the US during the week of St. Patrick’s Day with the goal of advancing partnerships and driving new business.

Overall, the State body is to host more than 50 trade and business events this week in more than 45 locations globally.