Business Week: Also in news were repossessions, building, and job losses at Eir 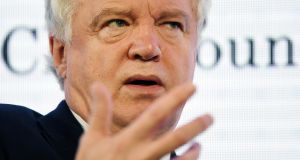 British secretary of state for exiting the European Union David Davies: his incorrect remarks prompted Simon Coveney to describe them as “way off the mark” and “nonsense”, before suggesting he might visit Dublin to learn about Irish politics. Photograph: Andy Rain/EPA

UK Brexit secretary David Davis managed to drop two clangers in the one sentence this week, drawing more ridicule and feeding fears that Britain is simply not doing its homework despite the knife-edge nature of divorce talks with the EU.

First, Davis claimed there had been a change of government in the Republic. Then, apparently shocked by Dublin’s tough stance on the Border, he suggested the Government’s negotiating tack was being driven by Sinn Féin.

“We had a change of government, south of the Border, and with quite a strong influence from Sinn Féin, and that had an impact in terms of the approach,” he said. His mistakes were quickly pointed out to him by a reporter who suggested he “check [his] facts”.

“Well you had a change of leader or a change in taoiseach,” Davis replied. “They’ve [Sinn Féin] been playing a strong political role which they haven’t done historically, that I hadn’t foreseen. We’ll leave our interpretations aside if you like.”

Minister for Foreign Affairs Simon Coveney described the comments as “way off the mark” and “nonsense”, before suggesting Davis might visit Dublin to learn about Irish politics. Even former Fianna Fáil taoiseach Bertie Ahern seemed incredulous.

In case Davis needed reminding, Danske Bank forecast the North’s economy would grow by just 1 per cent this year, it being the region most vulnerable to the effects of Brexit and currently without a functioning government.

In terms of the Republic, the Central Bank warned the effects of Brexit would be “deeply profound”, and that, in the event of no trade agreement being reached with the UK, the State’s gross domestic product could be 3 per cent lower over 10 years, costing us 40,000 jobs.

On the bright side, it said there was an “unprecedented level” of new financial firms seeking authorisation, to such an extent the regulator had been heavily recruiting as well as reallocating senior and experienced staff from “other important tasks”.

Meanwhile, European Council president Donald Tusk was in University College Dublin where he told an audience he was “furious” about Brexit, and that the coming year would be all about “disintegration instead of integration”.

“I don’t like Brexit,” he said. “Actually, that’s an understatement: I believe Brexit is one of the saddest moments in 21st-century European history. In fact, sometimes I am even furious about it.”

HALF OF HOMES IN ARREARS IN DANGER OF REPOSSESSION

No builders, rising house prices, and the owners of more than 14,000 units facing potential repossession. That was the take home message from this week’s instalment of the housing crisis, which still seems sadly out of control.

The Central Bank said owners of more than 14,000 homes in long-term arrears could lose their properties. Out of 28,046 private dwelling homes in arrears as of December, more than half of them are at risk.

The property market still shows no signs of cooling, with prices advancing 13 per cent year-on-year in February, an uptick on the 12 per cent annualised rate in January, according to the Central Statistics Office.

So, we need more houses, but the construction industry may need to recruit from abroad to keep up with demand as huge numbers of workers in the sector who emigrated during the crisis have not returned. The Central Bank’s report Where are Ireland’s Construction Workers? said the industry had regained only about one-third of the jobs it lost during the crash, lagging other industries.

It also found the profile of workers in the industry had changed, with those now employed being older, more likely to be Irish nationals, and with higher levels of education than a decade ago.

Some projects are under way, however, and a joint venture between the National Asset Management Agency and Harcourt Developments has got the go-ahead to build 526 new homes in Saggart, Co Dublin, adjacent to the Luas.

Meanwhile, 263 aspiring homebuyers in Dublin have applied for the Government’s new home-loan scheme to avoid Central Bank loan restrictions and lock in to low-cost interest rates. The €200 million budget may now run out before the end of the year.

BAD NEWS FOR EIR IN CONTEXT OF SALARY GROWTH FORECAST

There was disastrous news for staff at telecommunications company Eir on Thursday as it announced plans to cut 750 jobs – one in three of all office-based staff at the company. The bombshell came just days after a majority stake in the company was acquired by two French firms controlled by billionaire Xavier Niel.

The voluntary redundancy plan was described by Eir as “an effort to deliver cost savings and create a leaner, more agile organisation”.

The company, which has cut more than 2,000 jobs in recent years, currently has about 3,225 staff. The exercise is targeted at all grades of staff from workers in stores to managers, but excludes 1,100 of mainly field workers.

It won’t have sweetened the pill for Eir staff that the news was announced on the same day as the Central Bank forecast 7 per cent growth in Irish salaries over the next two years. That would represent the biggest pay rise in a decade for workers.

In its latest quarterly bulletin, the regulator said wages were expected to rise by 3.3 per cent in 2018 and 2019, twice the current euro-zone rate, on the back of strong economic growth and a further tightening of the labour market.

There were other positive indicators, with business lobby group Ibec predicting that all households should finally start to see some benefit from the recovery this year. Employment is on course to reach record levels as GDP climbs 5.6 per cent, it said.

Consumer spending will rise about 4 per cent in value terms, with more than 2.2 million people at work, and the State experiencing the fastest real wage growth in Europe. Ibec said household spending would climb above €100 billion for the first time.

Following last week’s focus on the gender pay gap, Bank of Ireland committed to increase the number of women in top roles. From the end of 2021, all new management and leadership appointments will conform to a 50:50 gender ratio.