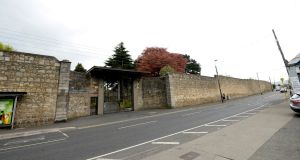 Patients and HSE staff will transfer from the Central Mental Hospital to a new hospital in Portrane in north Co Dublin. Photograph: Dara Mac Dónaill

The State plans more than 1,200 homes on a site belonging to the Health Services Executive (HSE) in a project worth €400 million.

The Land Development Agency (LDA), set up in 2018 to use State property for housing, plans to build more than 1,200 dwellings on the Central Mental Hospital site in Dundrum, Dublin.

Subject to An Bord Pleanála approval, the agency hopes to begin building there in early 2022, the LDA confirmed on Thursday.

According to agency estimates, the project could be worth more than €400 million, but the LDA’s investment will depend on how much cash it can borrow and the level of private-sector involvement.

The LDA said it would have a “strong focus” on building social and affordable homes on the Dundrum land.

In general, the agency earmarks about 30-40 per cent of the properties in its developments for social and affordable housing.

It will work out the final mix between private and social and affordable homes at Dundrum as the project is designed.

The agency intends building new homes on the grounds and re-using the mental hospital itself in a move that it says will open up the site, which is three times the size of Lansdowne Road stadium at 11.5 hectares.

Reddy Architecture & Urbanism will work with European consultancy, Tyréns, and several other Irish groups on the development’s design.

Patients and HSE staff will transfer to a new hospital in Portrane in north Co Dublin.

LDA chief executive John Coleman said it was an opportunity to develop land that had been closed off since the 1800s.

“We plan to transform the Dundrum and Windy Arbor area for the better with a landmark sustainable and inclusive new neighbourhood of in excess of 1,200 new homes, incorporating significant period buildings and matured landscaped grounds,” he added.

The agency pledged to consult with locals to ensure that the development took account of the community’s needs.

Mr Coleman also pointed out that while the challenges posed by the Covid-19 crisis were “immense”, the need for homes would not recede in the near term.

He added that the agency and its designers were working remotely to ensure as many projects as possible were ready for construction in the shortest possible time.

“The LDA is very much moving forward on its mandate which remains as important as ever,” Mr Coleman said.

The agency is now working on nine sites likely to contain 4,000 homes. The Government has pledged €1.25 billion to the LDA.

1 PTSB plays down Ulster Bank talk as it sells €1.4bn of loans
2 Up or down – how much is your Local Property Tax this year?
3 Housing crisis will be permanent unless there is radical rethink, industry warns
4 Irish tech company Asavie acquired by Nasdaq-listed Akamai
5 How much state pension will I get next year?
6 Am I crazy to consider switching to an Ulster Bank mortgage?
7 Disposable income in Ireland rose 28% between 2012 and 2019
8 Ghost newspapers and zombie brands are stalking the media
9 CRH sells Brazilian cement business for $218m
10 Customers say how companies act during Covid-19 reflects their trustworthiness
Real news has value SUBSCRIBE