Businessman with interests in Ericsson and Volvo investigated for suspected bribery 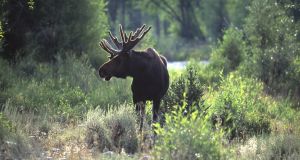 The suspected bribery relates to a series of elk hunts. Photograph: iStock

Fredrik Lundberg, one of Sweden’s leading businesspeople, has been questioned by prosecutors on suspicion of bribery in a big blow to his efforts to clean up large parts of Swedish industry.

Mr Lundberg, who as chairman and the biggest owner of investment company Industrivarden helps control companies including Handelsbanken, Ericsson and Volvo Group, is under investigation for suspected bribery relating to a series of hunts.

Anders Borg, the former centre-right finance minister and currently deputy chairman of investment company Kinnevik and a senior adviser to Citigroup, is also being investigated for allegedly accepting a bribe, according to Sweden’s anti-corruption prosecutors. Both men were questioned on Thursday and cautioned, the prosecutors said.

The probe is the latest setback for Industrivarden. Two years ago allegations about the frivolous use of business jets by managers, both of Industrivarden and the groups that the investment company has stakes in, led to wide-ranging personnel changes. In the spring of 2015, the chairman of Industrivarden was ousted, leaving Mr Lundberg to take up that role.

Mr Lundberg hosts two to three hunts a year at Holmen, the Swedish forestry group where he is also chairman, according to the company, and prosecutors have been investigating these events since 2015.

They interviewed him on Thursday, according to a statement from Holmen. It added that, regarding Mr Lundberg, prosecutors have “reasonable suspicion of giving a bribe”.

“I am convinced that both Holmen and I have managed everything correctly and that no violations have occurred,” Mr Lundberg said in a statement through his family holding company.

“Hunting arranged by Holmen on lands in the Norrköping area is a decades-long tradition and provides an opportunity to meet with Holmen’s employees as well as with external participants,” he added.

Holmen said he had led the hunts in a similar manner for more than 20 years.

Hans Strandberg, a lawyer for Mr Borg, said the questioning had to do with a hunt in October 2014, after Mr Borg stopped being finance minister. He said prosecutors homed in on the fact that Mr Borg was invited in the spring of 2014 when he was still finance minister.

Mr Borg’s stewardship of Sweden’s economy after the financial crisis garnered praise, and he was named as the best EU finance minister in 2011 by the Financial Times.

Mr Lundberg has cemented his power in Sweden on the back of the separate corporate jet scandal, which partly revolved around allegations of lavish hospitality, including hunting.

Since becoming chairman of Industrivarden he has led big changes across the sphere of groups the investment company is the largest investor in, including replacing management and unwinding cross-shareholdings.

In a recent interview with the Financial Times, Mr Lundberg described his role: “I try to concentrate on trying to do a good job and act in a way that is value-creating,” he said. “To be able to create value in the way we do, you have to take a long-term view.”