Shopping centres emerge as the hot property of 2016

In the first nine months of 2016, investors spent a record €1.5bn on retail assets 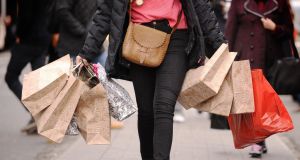 The Government sees consumer spending rising 3.3 per cent and 2.9 per cent for this year and next, albeit down from a 4.5 per cent surge in 2015, even as Brexit takes its toll on sentiment. Photo credit should read: Dominic Lipinski/PA Wire

As retailers dream of ringing tills this Christmas, some of the biggest landlords have already been to the bank.

Shopping centres emerged in 2016 as the hottest part of the commercial property market, with sales of the three largest malls in the country having been agreed. In the first nine months of the year, mainly overseas investors splashed out a record €1.5 billion buying retail assets, according to property consultants CBRE Ireland.

But that doesn’t include the largest retail deal ever in Ireland, the €1 billion-plus transfer of ownership of the 140,000sq m Dundrum Town Centre in July. This was facilitated as UK retail property group Hammerson and German insurer Allianz converted loans linked to the mall that they bought in 2015 into equity.

Nor does the figure factor in the agreed sale in October of the Liffey Valley Shopping Centre in west Dublin by Texas-based real-estate giant Hines, HSBC Alternative Investments and Grosvenor Group, the UK property group run mainly on behalf of the Duke of Westminster. The buyer, Germany’s largest public pensions group, Bayerische Versorgungskammer, is said to have offered more than €600 million for the 18-year-old mall.

“During the boom years in the Irish commercial property sector, retail formed a significant part of investment spend, but in the last few years office investments were the greatest portion of investor purchases, with no large shopping centres traded between 2007,” said Marie Hunt, head of research at CBRE Ireland. “This has reversed again the last two-year period.”

In the first few years of the rebound, the commercial property market, following a 67 per cent slump in values, was led initially by office purchases, as Irish exports, led by multinationals based in the State, remained robust throughout the downturn. However, consumers began to play a role the economic recovery in 2014, prompting investors to look at retail assets, which had been largely eschewed during the crisis.

The Government sees consumer spending rising 3.3 per cent and 2.9 per cent for this year and next, albeit down from a 4.5 per cent surge in 2015, even as Brexit takes its toll on sentiment. The unemployment rate has dropped from a high of 15.1 per cent in 2012 to 7.3 per cent in November.

“A healthy outlook for the Irish consumer and retail sector, alongside a lack of new supply of retail stock in the pipeline, are positives for the commercial retail sector,” according to Ronan Dunphy, an analyst with Investec in Dublin.

Still, a slump in sterling against the euro following the UK vote to exit the European Union has taken some of the lustre out of the recovery. A report last month from Goodbody Stockbrokers indicated that there has been a surge in cross-Border shopping in the North since August, a month after the referendum, particularly on Saturday mornings, which has been described as consistent with a leisurely weekend trip.

Consumer confidence has also dipped slightly since the Brexit vote, according to figures from KBC Bank Ireland and the Economic and Social Research Institute.

For the moment at least, however, rents continue to be on the increase. Green Reit, the country’s first real-estate investment trust to float after the crisis, said in its recent full-year report that rents are continuing to rise in prime high streets and shopping centres, where vacancy rates are low.

It also cited estate agents reporting that rents are growing at an annual rate of 10-15 per cent in provincial centres, depending on the location. Hammerson has said that its most recent round of rent reviews at Dundrum this year has cost tenants 10 per cent more.

Many of the retail centres that have traded in the past year have been forced or voluntary sales, as lenders, including the National Asset Management Agency, seek to get their money back. The Dundrum deal in July resulted from developer Joe O’Reilly’s company Chartered Land, originally indebted to Nama, agreeing to a consensual transfer of ownership to Hammerson and Allianz.

Hammerson, which also bought loans attached to O’Reilly’s 50 per cent interests in the Ilac Centre in central Dublin and Pavilions Shopping Centre in Swords last year, is currently advancing plans to acquire the underlying interests in the properties.

Others shopping mall sales have been opportunistic. Few more so than Green Property’s move earlier this year to sell the Blanchardstown Centre, which measures 112,000sq m, to US investment group Blackstone for €945 million.

While the massive Dublin sales grabbed most of the headlines in 2016, provincial trades have also surged.

It emerged last month tht US hedge fund Davidson Kempner bought a majority stake in Navan Town Centre in Co Meath for €62 million. This follows hot on the heels of the group spending €118 million buying a portfolio of six shopping centres – including ones in Athlone, Gorey and the Orwell Shopping Centre in Templeogue in Dublin – out of receivership from AIB earlier last year.

The deal was followed within months by Davidson Kempner stumping up €170 million for the Nutgrove Retail Park in Rathfarnham in Dublin and similar properties in Letterkenny, Sligo, Tullamore and Killarney. The parks were sold under the instructions of a receiver appointed by Bank of Ireland.

The biggest regional transaction this year was German fund manager Deka Immobilien’s €180 million purchase of the Whitewater Shopping Centre in Newbridge, Co Kildare, after it was put on the block last year by its joint owners, Ballymore Properties and Elm Holdings. The 29,730sq m complex achieved €30 million more than the original guide.

For many of the purchasers of Irish retail assets this year, the spending is far from over.

Blanchardstown has capacity for a further 148,645sq m of additional retail, residential, office and leisure facilities. Hammerson and Allianz are sitting on planning permission to extend the Dundrum retail complex into an adjoining six acre site, though the new owners have signalled they are most likely to scrap the project in favour of an apartments-led scheme.

Meanwhile, the soon-to-be new owners of Liffey Valley face the prospect of developing a 51,545sq m extension which would almost double the centre’s size.

1 Second Covid-19 outbreak and no-deal Brexit an appalling vista
2 Ireland faces 'deep downturn' this year and may not rebound until 2024 if there is a second wave
3 Why the Fed thinks Goldman is America’s riskiest bank
4 Why are markets booming when a crash is on the way?
5 ‘The rental situation stops me moving back home’
6 Supreme Court clears Bernie Madoff Ponzi loss case for hearing
7 Dublin consultancy Pathfinder set for expansion after buyout by Sia Partners
8 Why UK supermarkets are not making super profits
9 John FitzGerald: Civil Service expertise key to Government policy
10 Major works at Rosslare Europort after €30m investment from Irish Rail
Real news has value SUBSCRIBE