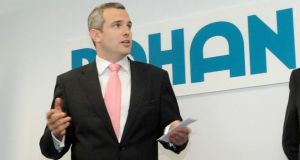 At the end of November last, the Rohan group – led by Jamie Rohan – had shareholder funds of €184 million that included €130 million in accumulated profits.

Members of the Rohan family, behind one of the country’s largest privately owned property investment and development companies, Rohan Holdings, this year shared a bumper dividend payout of €47.5 million.

The drop in pretax profits follows revenues decreasing by 45 per cent from €62.66 million to €34.28 million.

The revenue drop last year followed the firm’s property sales decreasing from €55.5 million to €26.4 million – the group’s revenue from rent increased from €7.1 million to €7.79 million.

The directors state that the group’s pretax profits were generated by the development and sale of industrial units; the refurbishment and sale of residential properties and strong lettings across the group.

The group’s developments include Grand Canal Plaza in D2 and the directors say the “strength of the balance sheet is reflected in the €122 million of property assets together with a significant land bank which have no attributable bank debt”.

At the end of November last, the group – led by Jamie Rohan – had shareholder funds of €184 million that included €130 million in accumulated profits.