US jury awards over €18m to Sean Dunne’s bankruptcy trustee 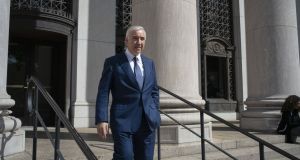 Sean Dunne leaves court in New Haven: a jury decided on Tuesday that he must pay $17.8m to his US bankruptcy trustee. Photograph: Douglas Healey

A US jury has found against bankrupt property developer Sean Dunne and his estranged wife Gayle Killilea over the illegal transfer of some assets to put them beyond the reach of creditors.

Jurors awarded Mr Dunne’s US bankruptcy trustee, Richard Coan, €18.04 million on the fourth day of their deliberations, finding that the Carlow developer had fraudulently transferred certain property, cash and other assets to Ms Killilea.

The award includes €14 million from the 2013 sale of Walford, which Mr Dunne purchased for €58 million eight years before, and a €3.015 million cash transfer from him to Ms Killilea in 2008 from a Credit Suisse account.

Transfers of other properties (in North Wall Quay in Dublin) and assets from Mr Dunne to Ms Killilea made up the rest of the award.

However, the jury found in favour of the defendants in relation to a number of other transfers.

The 10-person jury ordered Ms Killilea to pay all the damages.

The amount awarded to the trustee could increase as US district court judge Jeffrey Meyer has yet to rule on matters not put to the jury, such as unjust enrichment, according to the plaintiff’s lawyers.

Mr Coan’s legal team celebrated after the verdict, embracing each other in the hallway outside the court.

In a statement provided to The Irish Times, Ms Killilea described the verdict as a “mixed result”. She said it awarded “substantially less than the €100 million the trustee was claiming”, which she added had been “wildly exaggerated”.

“In our view the jury found Sean Dunne solvent through at least September 2008 and that the 2005 and 2008 agreements between Sean Dunne and Gayle Killilea were valid,” she said. “Unfortunately, however, we believe the jury was confused because they found that Walford was transferred by Sean Dunne to Gayle Killilea on March 29th, 2013 when it had been owned by Gayle Killilea since at least October 2006.”

Ms Killilea said the defendants might address the legal issues surrounding Walford and “other aspects of the verdict” with Judge Meyer and “may pursue an appeal”.

She also noted that the trustee’s claims were “denied” as to her Swiss and US investments and that there was “no finding of any misconduct or fraud by Gayle Killilea”.

While Ms Killilea says the trustee was claiming $100 million from the defenddants, the trustee declined to confirm this figure with The Irish Times. However, Mr Coan confirmed under cross examination that his law firm would earn a 3 per cent commission potentially totaling more than $900,000 on any recovered funds. That equates to the plaintiff seeking a potential award of at least $30 million.

Overall, the jury found against Mr Dunne and Ms Killilea on eight counts and for the defendants on eight other counts. They were split on two decisions.

Jurors reached their verdict around 9.30am on their fourth day of deliberation.

1 Bank of Ireland sees more than 1,400 staff apply for redundancy
2 Air travel never going ‘back to way it was’
3 J&J launches first phase 3 trial of single-dose Covid-19 vaccine
4 Coronavirus vaccine: 15 billion doses needed to inoculate the planet
5 Should I switch bank now with Ulster Bank at risk of closing?
6 AIB becomes first Irish bank to launch green bond
7 Bord na Móna to raise €1.6bn for climate action projects
8 Retailers creaking under lockdown rents as industry warns ‘Nama-like’ problem ahead
9 South Dublin land at €19m has scope for up to 500 homes
10 How to bring a hotel group through a pandemic
Real news has value SUBSCRIBE