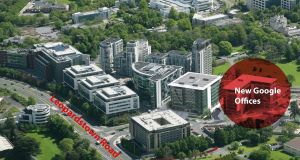 Google agreed to lease more than 7,000sq m (75,000sq ft) of office space at Block I, Central Park in Sandyford

A concentration of tech companies means the telecommunications, media and technology (TMT) sector has accounted for 75 per cent of Sandyford’s office take-up over the past three years, well above the central business district (CBD) average of 51 per cent.

The finance sector has also taken large amounts of space; while, in 2019, Genesis Aviation’s letting at Block I Central Park means that the aircraft leasing sector represents 11 per cent of take-up in the year to date.

Rents have risen steadily due to demand and low supply of larger city centre office developments. While average 2018 rents stood at €264 per sq m, the first nine months of 2019 saw this rise to €293 per sq m.

Rents continue to increase, with prime Grade A buildings now achieving over €323 per sq m.

When Google announced further expansion mid-2019, seeking an additional 7,000sq m in Sandyford, the global TMT giants had multiple options to choose from.

Their shortlist included One South County, developed by Cyril McGuire, Termini (Aldgate Developments), The Hive (U+I Plc), and Block I, Central Park, developed by Green Reit. The latter, which was recently acquired by Henderson Park Capital, was the eventual Google choice.

This additional space brings Google’s office facilities in the Sandyford Business District to 16,392sq m across three properties, The Chase, Blackthorn House and now Block I.

Demand has picked up considerably of late, with major occupiers including Mastercard, CPL Recruitment, Gilead, ResMed, Eurofins and Ericsson all now seeking office space in Sandyford.

BNP Paribas Real Estate is the letting agents on the One South County, which reached practical completion in Q2 2019.

One South County and Two South County, where construction will commence early 2020, extend to a combined 23,000sq m. Both blocks are currently under offer to a global occupier.

Once the South County office campus secures a tenant, Grade A office supply will significantly reduce with just two large office buildings remaining available, The Hive (6,782sqm), which recently reached practical completion, and Termini (20,842sqm), which is due for completion in the second quarter of 2020. However, prime development sites with permission granted for offices include the Eden Plaza site on Blackthorn Avenue (41,871sq m), the former FAAC site (36,617sq m) and the Highfield House site (27,559sq m), both on Burton Hall Road, and the ESB lands at Leopardstown (25,000sq m).

There is a growing emphasis on smart technology within buildings and demand for campus-style developments, particularly among global technology and finance operators.

This was evident from the type of occupier that looked at One South County this year, attracted by the potential to build a community and scale up quickly and easily without disrupting staff.

BNP Paribas Real Estate sees this as a growing trend, with LinkedIn and Amazon likely to follow in the footsteps of Facebook and Salesforce in confirming plans for major campuses next year.