30,000 desks are now available across 1.5m sq ft of flexible workspace in the capital 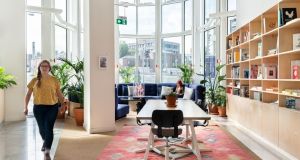 WeWork’s Charlemont Exchange is the largest flexible office space in Dublin with 2,400 desks.

But while there are now 60 flexible workspace providers in Dublin, the majority of these are operating at a relatively small scale when compared to the big five of WeWork, Regus, Iconic, Glandore and Pembroke Hall. Taken together, this group controls a massive 67 per cent of the serviced office market.

The average monthly price of a desk in Dublin has remained steady at €500 per desk (with one desk equivalent to approximately 50sq ft of space), while desks at the lower end start at €300. Desks in many of the larger, more modern spaces start from €650 per month.

Commenting on the figures, Shane Duffy, broker at Click Offices, said: “The increased demand for flexible workspace is not surprising when you look at the way we work today. Companies want short-term agreements which allow them to upscale or relocate rapidly.”

1 Up or down – how much is your Local Property Tax this year?
2 PTSB sells €1.4bn of mainly interest-only buy-to-let loans
3 How much state pension will I get next year?
4 Am I crazy to consider switching to an Ulster Bank mortgage?
5 Brexit to curb services trade with UK, accountants group warns
6 Mortgage drawdowns fall by almost a third compared to 2019
7 CRH sells Brazilian cement business for $218m
8 Profit down 12% at Newry-based First Derivatives
9 Oxford Covid vaccine trials offer hope for elderly
10 Fall in mortgage drawdowns, Brexit threat to services, and advice on your pension
Real news has value SUBSCRIBE