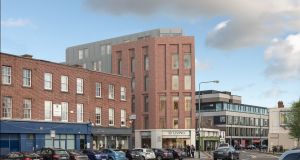 A computer-generated image of the 91-unit co-living scheme Westridge Real Estate intends to develop on the Kiely’s site.

Developer Shane Whelan’s Westridge Real Estate has secured the green light from Dublin City Council to proceed with the construction of a new co-living scheme on the site of Kiely’s in Donnybrook.

The development, which has been designed by architects, Henry J Lyons, will see the demolition of the landmark pub premises and its replacement with a six-storey shared-living scheme comprising 91 units.

While the news of Dublin City Council’s approval of the project will surprise some, coming as it does in the wake of Housing Minister Darragh O’Brien’s recent ban on co-living developments, Westridge is free to proceed with the Donnybrook scheme as its planning application predated the ban’s formal introduction on December 22 last.

The development’s 91 co-living units will be served by communal kitchens, and living and dining spaces on each floor. The scheme will also include external terraces within a courtyard at ground floor level, with roof terraces located at sixth and seventh floor level.

Residents of the development will also have access to a number of onsite amenities including a screening room, a gym and significant co-working shared space.

Occupiers of the development will be invited to avail of “member-facing platforms” through their desktops and mobile phones which will allow them to do everything from making rent payments to making service requests, as well as accessing concierge services. These platforms will also be used to promote what the developer describes as “community engagement”.

The Kiely’s scheme is also set to include a café and restaurant at ground level which the developer says will help to restore activity on Donnybrook’s main thoroughfare.

Westridge says it will seek to offer accommodation at the development to medical staff and other essential workers given its proximity to St Vincent’s Hospital and the Royal Hospital Donnybrook. The scheme is also likely to attract workers with nearby employers such as Google, LinkedIn, Amazon, Facebook and Avalon.