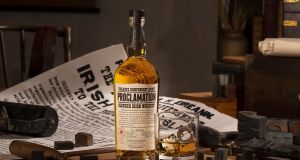 The company behind the Grace O’Malley Irish whiskey brand is back with a new whiskey that celebrates the 1916 Proclamation.

The new product comes just over a year since the company launched the Grace O’Malley brand, which covers a number of different whiskies and a gin that pay homage to the 16th century Irish pirate queen. As with that brand, Proclamation is sourced from the John Teeling-owned Great Northern Distillery, with Paul Caris, cellar master and blender at French company Alteroak, overseeing maturation and finishing of the spirit.

Mr Cope admitted that now might not be the ideal time to roll-out another whiskey given that duty free retail is down substantially due to travel restrictions, and many bars both here and overseas are either closed or have reopened with restrictions in place.

“Our attitude is the world doesn’t stop. Many of the outlets we would traditionally look at selling in are going through a difficult time, but we’re of the view that we just have to keep going as a business because there is no other option,” he said.

“While on-trade might be experiencing difficulties, there are opportunities in off-trade around the world, and so that is where we’ve focused our efforts. I do also think on-trade will be back soon enough.”

The company already has national distribution in place for Grace O’Malley with SuperValu, and hopes to have Proclamation on the shelves shortly. It is also focusing heavily on online sales for the immediate future.

Mr Cope said the first Proclamation whiskey is an entry-level product that has been aged in new American oak barrels and matured in bourbon casks. The blend includes a touch of sherry-finished malt to give a rounded, toasted finish.

Inis Tine Uisce Teoranta worked with historian Mícheál Ó Doibhilín on the product, which pays tribute to William O’Brien, Michael Molloy and Christopher Joseph Brady who printed the 1916 Proclamation in two pieces as they didn’t have enough type and had to customise the letter ‘E’.

Mr Cope said the company had to recreate some of the original font again so it could be used in digital formats.

Other backers include Irish marketing expert Jeff Burns and Berlin-based entrepreneurs Stefan Hansen and Hendrick Melle. The two have a majority stake in the new business through their company Private Pier Industries, which is behind a premium Irish pet food brand that is sold in 3,000 stores in Germany.

Mr Cope said prior to the lockdown Grace O’Malley had been selling well, with 90 independent retailers stocking it, along with its deal with SuperValu.

1 Two men face fraud charges over £1.2bn sale of Nama’s NI loans
2 Project Eagle: What was it and why is it in the news?
3 Microsoft now looking to acquire TikTok’s entire global business
4 TikTok to invest $500m in data centre and create ‘hundreds of jobs’
5 AIB defends ‘incredibly’ high €1.2bn loans charge as 2008 haunts
6 Hong Kong family backs Central Bank building buy
7 Will spouses have access to joint account after one dies?
8 Latecomer to science brings a woman’s insight to cure most common health issue
9 Roll up, roll up: capitalism will drive cannabis legalisation in Ireland
10 How to . . . enable the Windows 10 dark theme – and why
Real news has value SUBSCRIBE