Sports review 2017: The weird and the wonderful 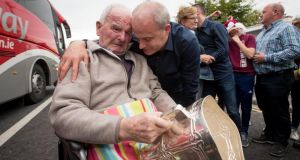 Micheál Donoghue shares an emotional moment with his father as he presents him with the Liam MacCarthy cup. Photo: Morgan Treacy/Inpho

Our failed bid to host the 2023 rugby World Cup broke many a heart. How sympathetic was Senator Terry Leyden?

“It’s crying over spilt milk at this stage … they made a bags of it. Let’s call a spade a spade… they wouldn’t negotiate a piss-up in a brewery, for God’s sake.”

Least appreciated bust of a footballer

That would be the one unveiled at the airport in Madeira back in March which was meant to be a likeness of Cristiano Ronaldo, after whom the airport was named. The reviews were the opposite of positive, most reckoning it looked more like Niall Quinn.

The sculptor responsible, Emanuel Santos, was a touch beleaguered in the end, sounding like a man who regretted the day he was hired for the job. He tried to remain defiant, though: “It is impossible to please the Greeks and Trojans. Neither did Jesus please everyone.”

Judge of the year

Our runaway winner is Judge Miriam Walsh to whom the task fell to punish Conor McGregor for driving at 158km/h on the Naas road.

“I have to ask, how much do you earn – and don’t say €110 million in one day,” she said at Blanchardstown’s District Court.

When she handed him a €400 fine, she showed considerable mercy (while trying to retain a straight face): “You can pay that in instalments.”

The most retweeted tweet from a sports person in 2017

It was the one LeBron James sent in Donald Trump’s direction after the Tweeter-in-Chief announced he was uninviting Stephen Curry to the White House.

Curry had been one of the stars of the Golden State Warriors’s NBA championship triumph, but had already decided not to attend the team’s reception at the White House because of his opposition to Trump and his policies. LeBron, then, politely pointed out that the “uninvite” was, well, pointless. At this stage, it’s 660,436 retweets and counting.

Most catastrophic ‘beat the traffic’ decision of 2017

That would be the one made by Cris Rolandus, a Dutch man living in Barcelona, back in March, when he left the Nou Camp seven minutes from time in the Champions League game between Barca and Paris Saint-Germain.

At that point, PSG led 5-3 on aggregate, having clobbered Barca 4-0 in the first leg, so Cris decided it was safe to depart and beat the crowds.

How did Cris take it? “I spent the rest of the night just staring at nothing. Such a wonder will never happen again. I felt like I was standing in the middle of a party, between death and mortal sin.”

The most overused gag of the year was the one about Tiger Woods making more comebacks than Frank Sinatra. His latest, though, at the Hero World Challenge in the Bahamas in November, was more promising than most, three sub-70 rounds helping him to a share of ninth.

His greatest relief was that he showed his kids that he can be quite decent at the game. “They’ve never seen what I can do,” he said, “they thought I was the YouTube golfer.”

Photo of the year

The one that had the nation reaching for the Kleenex – Galway manager Micheál Donoghue showing his father Miko the Liam MacCarthy Cup when the team stopped off at Ballinasloe on their homecoming. Take a bow, Morgan Treacy of the Inpho agency.

That would have been All Blacks coach Steve Hansen’s take on neither winning nor losing: “It’s a bit like kissing your sister, isn’t it? There’s nothing in it.”

Defendant of the year

The award goes to the 18-year-old fella who was charged with causing £3,994 worth of damage to a Travelodge in Borehamwood and ended up in St Albans Magistrates Court.

The general consensus was that his parents might possibly be Arsenal fans. The general hope was that he hadn’t opted to support Spurs.

That would have been Kilkenny’s Ann Downey when she heard that Cork camogie legend Gemma O’Connor wouldn’t line out in the All-Ireland final due to injury, as “confirmed” by Cork manager Paudie Murray before the game.

Downey: “I think that Gemma will play today. We’ve been gearing our training towards her being on the field. She’s a great warrior, unless she’s after losing a leg.”

How right was Downey? Very. O’Connor played from start to finish, scoring an equaliser from the halfway line in the last second of normal time before Cork won it in added time. Imagine if she was fit.

When Canterbury Crusaders announced their newest recruit: “Top o’ the mornin’ to ya! We have some exciting news to start your day, to be sure… Ronan O’Gara is our new Backs Coach!”

That’s how many goals and points Cora Staunton scored for Mayo, since her debut in 1996, by the time she headed for Australia to start her professional spell with the Greater Western Sydney Giants.

She’ll decide around April if she’ll play for Mayo again next year. But, she said, “I’ll have to see if they want me”.

After the Republic of Ireland’s scoreless draw in Copenhagen in the first leg of their World Cup qualifying play-off, the nation began looking up affordable accommodation in Russia next summer, such was the optimism. Danish midfielder Thomas Delaney (yes, he’s Danish) summed up the frustration of playing Martin O’Neill’s men:

“We tried and tried, but it was a bit like opening a can of baked beans with your bare hands.”

The second leg? Denmark came close to scoring 57 varieties of goals. Dream over.

Back in July the Ladies Professional Golf Association sent a rather stern email to its members advising them of a new dress code policy. Among the instructions were that – and note the caps – “Plunging necklines are NOT allowed”, and that the length of players’ skirts or shorts “MUST be long enough to not see your bottom area (even if covered by under shorts) at any time, standing or bent over”.

Former Leinster and Ireland second row Mike McCarthy on the toughest aspect of life since having to quit the game due to an elbow injury.

“Getting kicked out of the squad’s WhatsApp group. That’s pretty bad.”

Apology of the year

“A previous version of this story included an image of Lukas Podolski on a jet ski. Breitbart London wishes to apologise to Mr Podolski. There is no evidence Mr Podolski is either a migrant gang member, nor being human trafficked.”

Yes, right-wing website Breitbart used a random photo of the German World Cup winner on a jet ski to illustrate an article about the use of jet skis in the illegal trafficking of people.

This text message passed on by a Padraig Kearney to sportsjoe.ie:

“Due to Roscommon game in Croke Park any cows on heat Saturday evening will be AIed early on Sunday morning. Sorry for any inconvenience caused. UP THE ROSSIES.”

And it used to be just a case of the cows not being milked.

That would be the one Mohammed Anas did on receiving his man of the match award after scoring twice for Free State Stars against Ajax Cape Town in South Africa’s Premier Division.

The warmest tribute to that International Rules Series between Ireland and Australia?

“... a makey-up game ... a poor man’s version of international sport, a desperate man’s version... if the club is truly the pillar of the association then it should be in no way undermined for the benefit of a small number of elite players playing a bastardised game with a dodgy past and a non-existent future.”

After Churchill won the 2,000 Guineas at Newmarket in May, Ted Walsh doffed his cap. But not to the fella he was named after.

“He was named after a famous man, I suppose, I don’t know how great a man he was now, but he’s famous any way – if you were in the Dordogne in the early war you wouldn’t think he was so hot.”

Most heroic attempt to lift the spirits of dejected supporters

Martin Keown after Bayern Munich annihilated Arsenal 10-2 on aggregate in the Champions League.

Just like Stephen Curry, you suspect the legend that is Andy Murray won’t be getting an invitation to the White House any time soon.